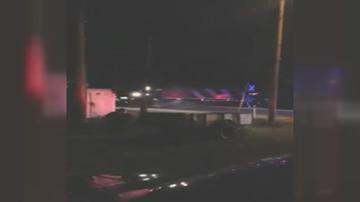 TREVOR- A train hit a car stuck on the tracks in Kenosha County late Friday night.

This happened in Trevor, WI on Wilmot Road at the Canadian National railway tracks.

The Kenosha County Sheriff's Department told CBS 58 that the people in the car were taking their friend to the hospital because he had taken some drugs and was acting strange.

During the drive he grabbed the steering wheel of the car and got it stuck on the tracks.

Everyone got out of the car safely.

Officials tried to notify the train's dispatch, but were not able to stop it in time.

The Fire Department said this train was close to a mile long and weighed in at about 700,000 tons.

A Canadian National spokesperson said the train was headed northbound from Memphis to Winnipeg, Manitoba. It was carrying a mix of general freight.

In all, the train was only stalled for about 30 minutes.

CBS 58 was told two people were taken from the scene.

One to the hospital by the Fire Department and the other by law enforcement.
Share this article: