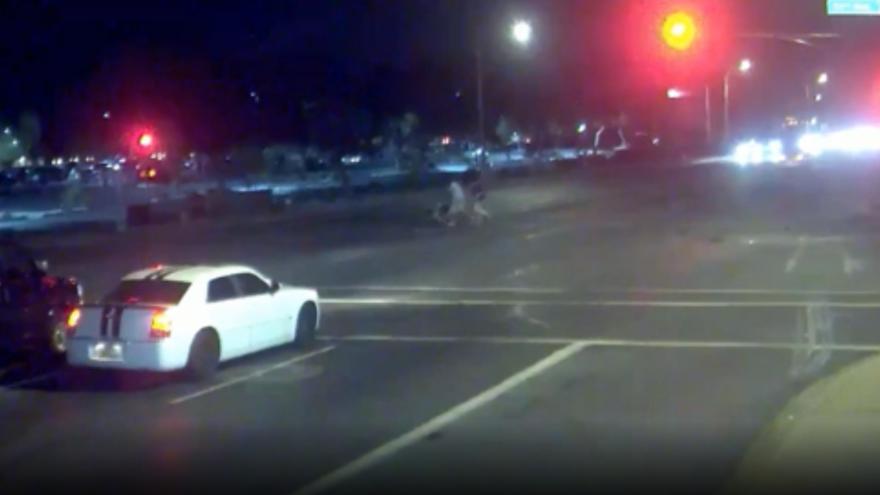 PHOENIX (3TV/CBS5) -- It was a close call in Phoenix when a red-light runner blasted through an intersection, narrowly missing a couple pushing a stroller.

The Phoenix Police Department tweeted out the hair-raising video of the near miss, which happened on Oct. 14.

The couple with the stroller had just entered the crosswalk at the intersection of 53rd Avenue and Indian School Road, on a green light, when a red-light runner came careening right directly toward them.

Thankfully, a Chevy Cruze entered the intersection at the same time and blocked the impact, and the couple and stroller were not hit.

Police say the red-light runner has been identified as 23-year-old Ernesto Otanez Oveso.

Phoenix police say Oveso and his female passenger took off running after the crash.

A witness actually followed Oveso, trying to keep him in sight. Oveso noticed the car and told the 25-year-old man to stop following him. Police say he then pulled a knife and jabbed at the driver through his window. As the witness pulled away, police say Oveso stabbed one of the doors on the car.

Officers later caught up with Oveso, and he was arrested.Police say they also found a gun in his Jeep.

The woman with Oveso at the time of the crash was not located.

The driver of that Chevy Cruz was a 27-year-old woman. While she did suffer injuries, they were not life-threatening.

Some commenting on the story call that driver an angel, a hero and even mention divine intervention.

The innocent driver will be OK.