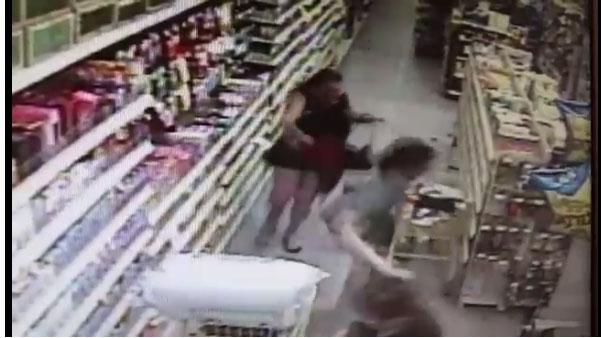 HERNANDO, Fla. (CBS NEWS)- A Florida man was arrested on charges of kidnapping and child abuse after store surveillance video showed him dragging a 13-year-old girl away from a desperate mother.

Surveillance video shows the suspect, who was wearing a green T-shirt and khaki shorts, calmly pushing a shopping cart inside a Dollar General in Hernando, Florida, before abandoning the cart and walking toward the woman.

A few seconds later the man can be seen toward the edge of the screen lunging for the girl, then dragging her toward the camera and through the store, as the mother gives chase.

Near the front of the store, he can be seen struggling as the woman tries to pull her child away.

Finally the man lets go and takes off running. Outside the store, the mother and the store manager flagged down a deputy who happened to be nearby, according to an affidavit obtained by CBS News.

The child and her mother were not injured during the incident, authorities said. They told investigators that they have never met the suspect before, according to the affidavit.

Bonello allegedly admitted to investigators that he did not know the victims, according to the affidavit.

"The defendant would not advise what he planned on doing after he would have taken the victim," a deputy wrote in the affidavit.