Vicky White had a 'special relationship' with inmate Casey White. Here are some other people who fell in love with inmates behind bars 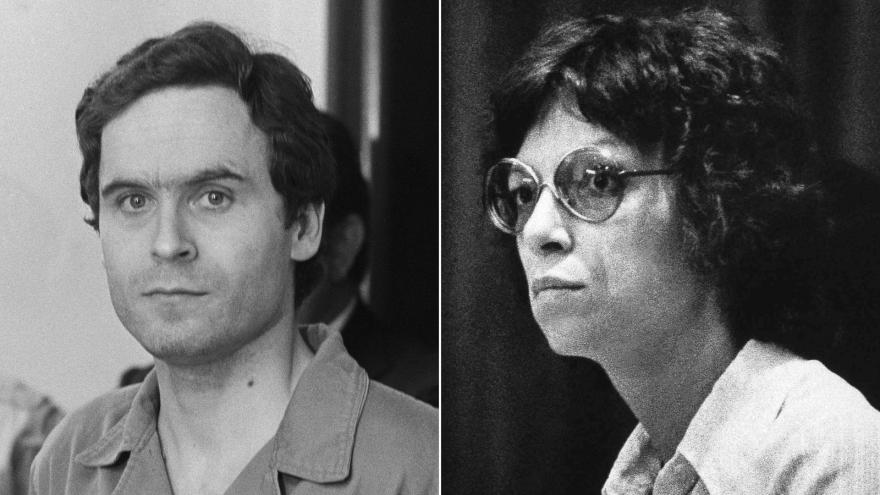 (CNN) -- An Alabama corrections officer who disappeared late last month with an inmate -- with whom authorities believe she may have had a romantic relationship -- died of a gunshot wound.

Officer Vicky White, 56, and inmate Casey White, 38, were arrested in Evansville, Indiana, on May 9 after a nationwide manhunt ended in a car chase and with Casey White wounded from an apparent self-inflicted gunshot, according to officials.

Hours later, Sheriff Dave Wedding of Vanderburgh County told CNN she had died due to her injuries.

She has been accused of permitting or facilitating escape in the first degree and other charges. Before he escaped April 29, Casey White was accused of murder.

From all accounts, Vicky White's supervisors described her as a "model employee" and a "reliable person," and the case left friends, family and everyone who knew her stunned by the possibility she may have developed a liking for a man charged with murder and possibly helped him escape.

But Vicky White was not alone. A quick look at the history of some very infamous murderers and serial killers show they had large fan followings, and many of them got married to their fans while in prison.

Experts say there is a term for this kind of attraction.

"Sometimes referred to in our culture as 'Bad Boy Syndrome,' hybristophilia is the attraction to and/or sexual interest in those who commit crimes, particularly heinous and violent crimes such as rape and murder," said Dr. Casey Jordan, Criminologist and Professor of Justice and Law Administration at Western Connecticut State University.

"Vicky White surely believes she's in love with Casey White, because he gives her a feeling of being alive after decades of feeling staid, safe and 'reliable,' " Jordan added.

Here are some examples of romances unimpeded by prison bars:

Prison worker Joyce Mitchell, who helped two convicted murderers, Richard Matt and David Sweat, break out of an upstate New York prison in 2015 was convicted of promoting prison contraband and criminal facilitation, and was released in 2020 after serving five years in prison.

Authorities said Mitchell, a prison tailor, provided Matt and Sweat with tools they used to cut through cell walls for their escape from the facility in Dannemora, New York. But, she eventually did not follow through on her role in the escape plan, which included Matt killing Mitchell's husband, Lyle Mitchell.

"Inmate Matt and I got along well. We talked every day and he treated me with respect and was nice to me. He made me feel special," Mitchell said in her confession.

"The deep void they feel in middle age as they struggle with the aging process and grief for a declining sense of attractiveness and the loss of excitement in their lives is somehow filled by the attention of a Bad Boy... they act just like a teenager and take unimaginable risks without any care of how it will end," Jordan explained.

"I know I had agreed to help them escape and run away with them, but I panicked and couldn't follow through with the rest of the plan. I really do love my husband and he's the reason I didn't meet Inmate Matt and Inmate Sweat," Mitchell said in her statements at the time.

"Human behavior is complex, and the motivations behind behavior can be from many reasons. And so for some, depending on what motivated the behavior or psychiatric conditions they have, it absolutely could be when they're out of that context, or something else happens in their life, that they realize the error of their ways," said Dr. Arielle Baskin-Sommers, Associate Professor of Psychology and of Psychiatry at Yale University.

Ted Bundy preyed on young women and eventually confessed to more than two dozen murders before he was executed, but he may have been linked to additional killings.

While he was on trial for murder, he married Carole Ann Boone who later had his child. Boone, who had worked with Bundy at the Washington State Department of Emergency Services, testified for him as a character witness and they married during the trial, literally while she was testifying.

"Fixer-Saviors believe that they have been given a sign (often by God or a higher power) to save the criminal. She often refuses to acknowledge evidence of guilt, insists he was framed, and believes that she has unique insight into his psyche," Jordan said.

Bundy, with his good looks and college education, could also be very charming. He had studied psychology in college, worked as a suicide hotline volunteer while at school and served at one point as assistant director of the Seattle Crime Prevention Advisory Commission.

"Just on the general human level, people want to feel wanted and want to feel connected and want to feel complimented, and some of these men are very good at doing those things. Ted Bundy was very charming and very engaging. And so you could imagine for any human being, once you're kind of sucked in and charmed and engaged, you do anything to kind of discount the examples of behavior that might be more problematic," Baskin-Sommers said.

Mass murderer Charles Manson, at age 80, had planned to marry 26-year-old Afton "Star" Burton while he was in prison. She had started communicating with him via letters and phone calls and then moved near Corcoran State Prison in California where he was incarcerated when she was 19 years old.

She believed in his innocence, spending years trying to clear his name, and continued to support him, although she said she knew people thought she was crazy.

"I don't care what those kind of people think. It doesn't make any difference. The man that I know is not what they have in the movies or in documentaries and the books. He's nothing like that. He doesn't tell people what to do. He's not manipulative at all," Burton had said at the time.

"These women often have a long history of getting involved with "bad boys" and seeking to fix their wicked ways or bring them to salvation. In their mind, their undying faith and commitment will bring him around," Jordan said.

Baskin-Sommers said some convicted murderers demonstrate characteristics consistent with a disorder called psychopathy. "That disorder is associated with superficial and charming behavior and a lack of genuine relationships... they would just be using women to do things: help them get them out of jail, pay for services," she explained.

Erik Menendez and his brother Lyle, who were convicted of the 1989 slayings of their parents, both married while in prison. Lyle Menendez married his longtime pen pal Anna Erikkson, a former model, but they later divorced and he remarried. And Erik Menendez married Tammi Ruth Saccoman.

"The most basic underlying reason for the attraction is indeed the infamy of these criminals... who have been super-hyped in the media and are household words," Jordan said.

"Many deeply insecure people who crave attention and validation from a well-known person seek out the famous criminal as the subject of their love and attraction. Their lives are usually empty and boring with no prospect of achievement or self-actualization, so they believe their association with the killer will fill the void," Jordan added.