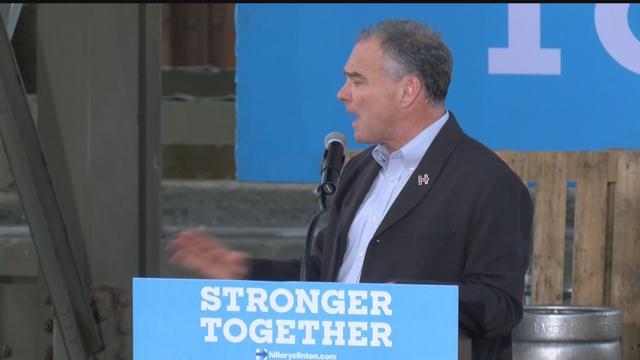 CBS 58-- Sen. Tim Kaine made a stop at Lakefront Brewery Friday afternoon to talk about jobs and the economy.

Sen. Tim Kaine says within the first 100 days of a Clinton Presidency, they will make the biggest investment in job creation since WWII. He says they’ll fund infrastructure, make education more affordable and increasing the minimum wage.

“How do we share prosperity? We do it through profit sharing,”Kaine said. “We do that with not letting companies get tax breaks for shipping jobs overseas.”

Kaine, who was joined by several Wisconsin Democrats including Rep. Gwen Moore (D-District 4) and Sen. Tammy Baldwin (D-Wisconsin), then went after what he called a lack of detail in Trump’s plans.

“What is Donald trump going to do about the economy? Well he gives you the punchline everyone’s gonna get rich,” Kaine said. “But when you ask how, he just says believe me.”