Veterans welcome American flag back from Nation of Patriots tour 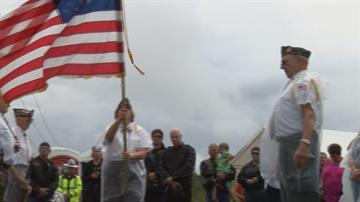 \"Patriotism is not something that's given or earned,\" Proctor said.  \"It's something you have to live.\"

For the New Mexico native, that's thousands of miles, ending up in Beaver Dam, Wisconsin Saturday.

\"People take a lot of what we have for granted and they shouldn't do that,\" Proctor said.

The veteran joined hundreds to welcome the return of an American flag, back from its hundred-day journey through the lower 48 states on the Nation of Patriots Tour.

\"If me coming out here gets one dollar more to help a veteran then so be it,\" Proctor said.  \"I'll make it every time i can come out.\"

Founded in 2009, the tour raises money for wounded veterans and their families.

The Waukesha native started the tour himself.  Sherer never served in the military, but had plenty of friends who did.

\"I just couldn't fathom the fact that these men and women are willing to put their lives on the line for us to have a nice, comfortable life of freedom and then they come home and they can't pay their mortgage,\" Sherer said.

Governor Scott Walker and other state leaders thanked Sherer for his work, which raised more than $83,000 this year alone.

\"It's not about Republican or Democrat, it's not about red or blue states,\" Walker said.  \"It's about red, white and blue and we should all appreciate the men and women who served.\"

Something Terry Proctor has -- and will -- continue to do.

\"Maybe one day we might not have to do this to get money to help the wounded,\" Proctor said.  \"God, wouldn't that be nice?\"

Sherer hopes to raise $100,000 by the time he starts cutting checks to veterans in a few weeks.  If you'd like to help by donating, visit the Nation of Patriots website here