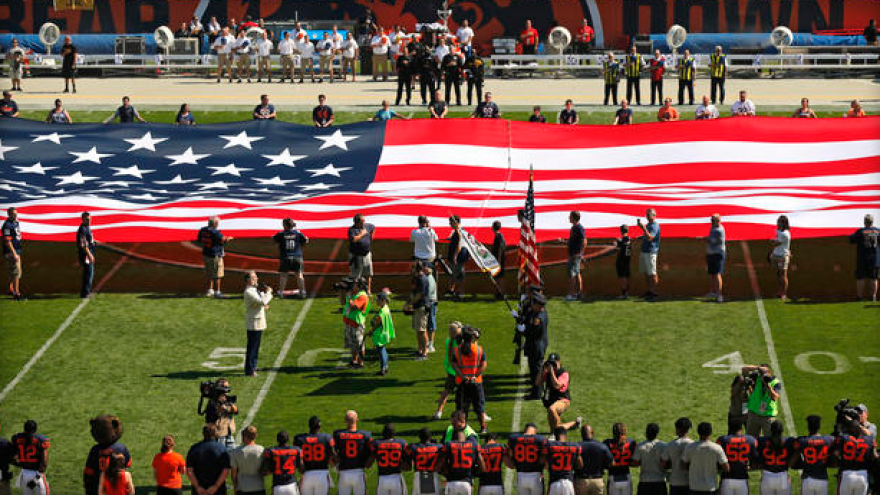 Days before Super Bowl Sunday, a veterans group's ad urging fans to stand during the playing of the national anthem has been rejected by the NFL. The print ad called for donations to the organization American Veterans (AMVETS), which aims to "enhance the quality of life for all veterans, their families and survivor."

It features the hashtag "#PleaseStand" prominently -- a response to the practice of some NFL players to drop to one knee, rather than standing during the playing of the national anthem. The group had submitted the ad to be included in the Super Bowl print program.

According to the Associated Press, NFL spokesman Brian McCarthy said the league had asked AMVETS to consider alternative options for the message, like "Please Honor our Veterans" or "Please Stand for our Veterans."

The organizations were unable to agree on language in time to meet production deadlines. McCarthy said a separate ad from the Veterans of Foreign Wars group with the words "We Stand for Veterans" was approved.

In response, the group penned a letter for NFL commissioner Roger Goodell, saying it appreciated the opportunity to have an ad featured in the official Super Bowl LII program, but said its appreciation "quickly gave way to deep disappointment when we learned your staff had refused to publish our ad."

The group complained that it had not intended to comment on players choosing to kneel during the anthem.

President Trump has repeatedly lashed out against the NFL for not intervening in the controversy over social media.

Vice President Mike Pence even made a dramatic exit from a Colts and 49ers game in October after players kneeled during the national anthem. He said that he would "not dignify any event that disrespects our soldiers, our Flag, or our National Anthem."

The president most recently addressed the controversy while delivering his first State of the Union speech on Tuesday:

"Young patriots, like Preston, teach all of us about our civic duty as Americans. And I met Preston a little while ago, and he is something very special -- that I can tell you. Great future. Thank you very much for all you've done, Preston. Thank you very much. Preston's reverence for those who have served our nation reminds us of why we salute our flag, why we put our hands on our hearts for the Pledge of Allegiance, and why we proudly stand for the National Anthem," he said.

While the ad will not be in the program for Sunday's game, a version of the ad that solicits donations is posted on AMVETS website.