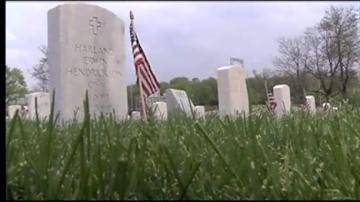 There are more than 37,000 brave soldiers resting here there, each of whom gave their life for our freedom.

It's a debt that can never be repaid, but the message given encouraged Americans that they can dedicate themselves to keeping the memory of those fallen alive.

Sounds of the American Legion Band filled the air with patriotic spirit before the ceremony began.

They offered comfort for families who lost a loved one in combat, gratitude for veterans and prayers to protect those still serving.

A flyover by the Commemorative Air Force served as a stark symbol to mark the occasion.

Those young and old watched the traditions of tribute, all vivid reminders of the cost to defend the Stars and Stripes.

\"You think about it and you say wow, would you do it again?\" questioned veteran Nick Thomas. \"Yeah, you'd do it again, but you Wouldn't want to do it again.\"

\"The kids before 9-11, they took it for granted because they didn't really understand what freedom costs and now, it's front page news everyday,\" said veteran Gary Skaggs.

Thirty-seven black balloons were also released to remember those Wisconsin Vietnam War veterans missing in action, in addition to a wreath laying and the playing of taps.