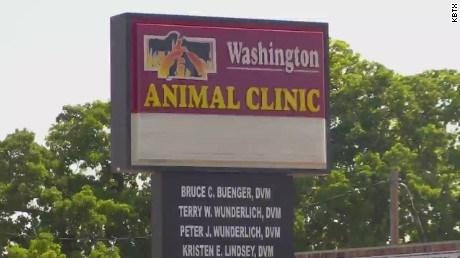 (CNN) Hey, look what I did. That small boast on social media can trigger a whirlwind that spins into real-life grief, as a Texas veterinarian found out after shooting a cat.

Dr. Kristen Lindsey allegedly shot an arrow into the back of an orange tabby's head and posted a proud photo this week on Facebook of herself smiling, as she dangled its limp body by the arrow's shaft.

Lindsey added a comment, CNN affiliate KBTX reported. \"My first bow kill, lol. The only good feral tomcat is one with an arrow through it's head! Vet of the year award ... Gladly accepted.\"

Then an animal rescuer said that Lindsey's prey was probably not a feral cat but the pet of an elderly couple, who called him \"Tiger.\" He had gone missing on Wednesday, the same day that Lindsey posted the photo of the slain cat.

CNN has not been able to confirm the claim.

As the firestorm grew, Lindsey wrote in the comments underneath her post: \"no I did not lose my job. Lol. Psshh. Like someone would get rid of me. I'm awesome!\"

That prediction was wrong.

The clinic fired Lindsey, covered her name on its marquis with duct tape, and publicly distanced itself from her actions.

\"Our goal now is to go on and try to fix our black eye and hope that people are reasonable and understand that those actions don't anyway portray what we're for here at Washington Animal Clinic,\" said Dr. Bruce Buenger. \"We put our heart and soul into this place.\"

The clinic told WBTX that Lindsey was not available for comment. CNN is reaching out to her. She removed her controversial post then eventually shut down her Facebook page.

The sheriff's office in Austin County, where the cat was apparently shot, is investigating, and Lindsey could face charges. Its dispatchers were overloaded with calls, the sheriff posted on Facebook.

\"We are asking you to please take it easy on our dispatchers. As soon as the investigation is complete, we will post the relevant information here on this page,\" the post read.

\"Animal cruelty must be taken seriously, and the guilty parties should be punished to the fullest extent of the law,\" said cat advocacy activist Becky Robinson. Her organization, Alley Cat Allies, is offering a $7,500 reward for evidence leading to the arrest and conviction of the person who shot the cat.

But others stood up for Lindsey. \"She's amazing. She's caring,\" said customer Shannon Stoddard. \"She's a good vet, so maybe her bad choice of posting something on Facebook was not good. But I don't think she should be judged for it.\"

She dropped off balloons at the animal clinic for Lindsey with a thank you note.
Share this article: