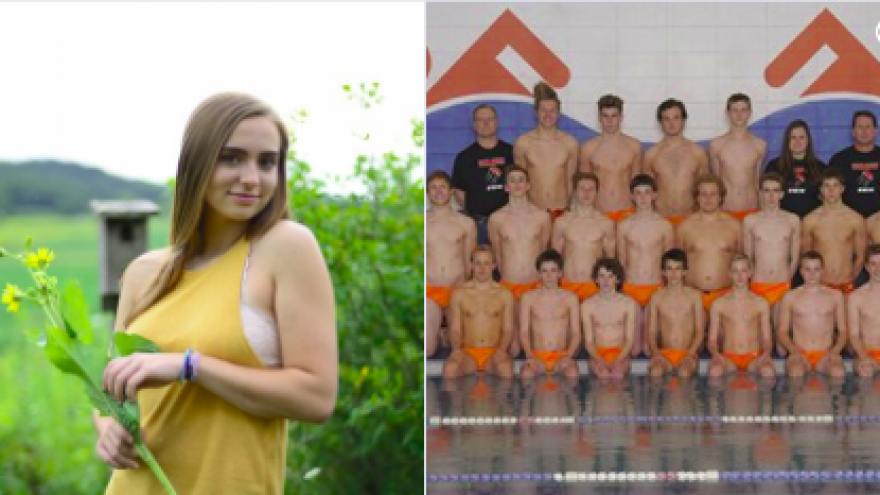 VERONA, Wis. (WMTV) -- When Eleanor Fitzwilliams submitted her senior yearbook photo, she was thinking about one thing: "I just feel like it had the most personality," said Fitzwilliams, a senior at Verona High School.

But a school faculty member thought something else. She told Fitzwilliams the photo was "inappropriate" because you could see her bralette though the sides of her shirt.

Fitzwilliams was told she broke the school's dress code policy, which reads, "Undergarments may not be visible."

She agreed to change the photo, but voiced her frustrations on Twitter. She posted her picture along side the shirtless, boys swim team photo, with a tweet that read:

"Here's my senior picture, because you can see part of my [bralette], it was 'too inappropriate.' Yet, here's the boy's swim team picture," Fitzwilliams pointed out.

She said she was pointing out a double standard within the school's policy. The tweet went viral. It has more than 30,000 retweets and 174,000 likes.

"This is bigger than just me. I now have a platform to speak out about the sexualization of women's bodies, particularly in dress codes," Fitzwilliams said.

The Verona School District told Gray affiliate WMTV-TV they do not have a comment, but Fitzwilliams hopes to speak with leaders at the school about how they can change the policy to fit more modern styles.

here's my senior picture. because you can see my part of my brallette, it was "too inappropriate". yet, here's the boys swim team picture. pic.twitter.com/hGg2G3ubO6