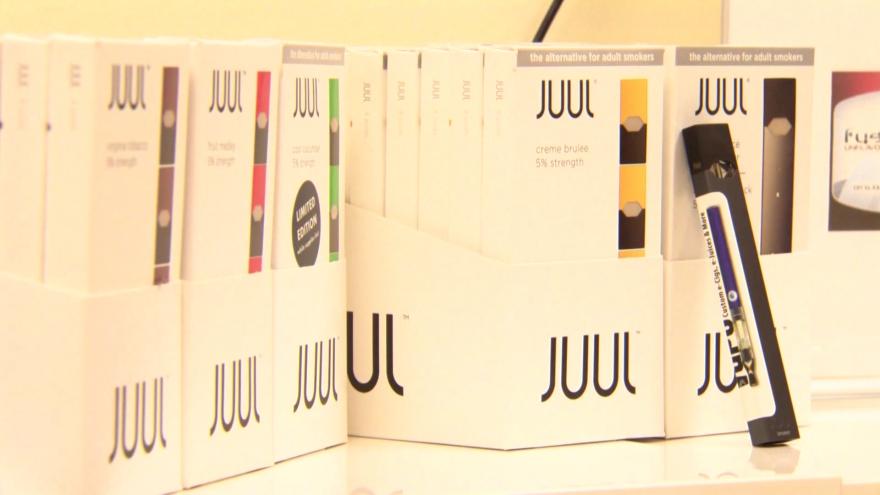 (CBS News) -- The FDA is holding a hearing Friday morning to address the alarming spike in teen vaping and how to help those who want to kick the habit. According to the National Youth Tobacco Survey, more than 20 percent of high school students admitted to using an electronic cigarette within the last 30 days – up more than 77 percent since 2017.

It's a disturbing trend and one that has parents and doctors scrambling for a reasonable solution. But the options for treating nicotine addiction in children is limited at a time when teen vaping is exploding in popularity, reports CBS News' David Begnaud.

Fifteen-year-old Phillip Fuhrman and 17-year-old Caleb Mintz say they are constantly surrounded by vaping – both inside school walls and out.

"It's just so easy to get, and it's just everywhere," Phillip said. Added Caleb, "it's not really even a social thing anymore. People are just doing it alone, and it's just to get by."

Both have experience vaping – Phillip since the eighth grade. Now they are working to prevent their peers from getting addicted.

Their mothers – Meredith Berkman and Dorian Fuhrman – are cofounders of the group Parents Against Vaping E-cigarettes or PAVE.

"Kids don't understand really what is in a vape or a Juul," Dorian said.

They could be right. According to a survey conducted last year by the Truth Initiative, 63 percent of Juul users aged 15 to 24 don't know the product always contains nicotine. Caleb said he thought Juul was "harmless" and just contained "water vapor."

Linda Richter is director of policy, research and analysis at the Center On Addiction in New York.

"It's very addictive and it's especially addictive for young people," said Linda Richter, the director of policy, research and analysis at the Center On Addiction in New York. "They are made of a type of nicotine that actually gets absorbed into the bloodstream and therefore to the brain quite quickly and has its effects rapidly and quite potently."

A recent study found e-cigarettes could be a gateway to other harmful products. Young adults who use them are about four times as likely to begin smoking cigarettes within 18 months compared to those who don't.

Physicians who want to treat young people with nicotine addictions also face a lack of treatment options. Nicotine patches and gums are not approved for children.

"So people turn to counseling and to the extent that that works great, but there's really no good studies or evidence out there right now on exactly what types of counseling would work best," Richter said.

Juul Labs – the largest e-cigarette company – has taken some steps to limit exposure to children. Last November, the company shut down its Facebook and Instagram accounts. It also cut off its supply of certain flavored pods to more than 90,000 retailers.

That won't necessarily stop kids like Phillip. He bought his first Juul pod on eBay.

"If you really try hard enough, you'll be able to find a Juul or vape within 10 seconds," Phillip said.

On Friday, the boys and their mothers will be on Capitol Hill where they will ask the FDA to take all flavors of e-cigarettes off the market.

"They have the authority to do it, and we know they want to protect our kids and this is the way to do it. But it has to be done yesterday or younger kids will start," Meredith Berkman said.

Juul controls about 70 percent of the e-cigarette market. In a statement, the company told CBS News "underage use of Juul and any other vaping products is completely unacceptable … we will be a transparent, engaged and committed partner with (the) FDA…in the effort to combat underage use."

One argument expected to be heard at Friday's hearing is that one vape pod has about the same amount of nicotine as an entire pack of cigarettes.