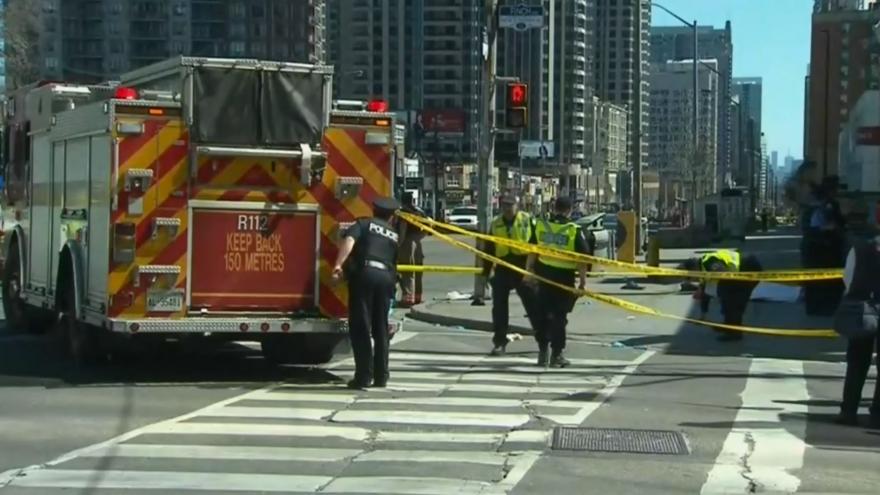 TORONTO (AP) — The latest on the van striking pedestrians in Toronto (all times local):

The White House is offering its condolences to Canadians following the deadly rampage of a van down a Toronto sidewalk that killed 10 people and put 15 in the hospital.

Press secretary Sarah Huckabee Sanders says in a statement Monday night that the U.S. stands with the Canadian people "in the aftermath of today's tragic event in Toronto."

She adds: "Our thoughts and prayers go out to the families of those affected, and we wish a full recovery to those injured. The United States Government pledges to provide any support Canada may need."

Toronto's police chief says an incident in which a rented van smashed into pedestrians appeared to have been deliberate.

Police Chief Mark Saunders made the comment at a news conference Monday night hours after the van killed 10 people and left 15 more hospitalized. The driver had fled but was surrounded by police and detained.

The chief identified the suspect as Alek Minassian, a 25-year-old from the Toronto suburb of Richmond Hill.

Toronto's police chief says a 10th person has died after a rented van plowed into pedestrians along a sidewalk in Toronto. Fifteen people are reported in the hospital.

The suspect is identified as Alek Minassian, a 25-year-old from the Toronto suburb of Richmond Hill.

A Toronto police official says nine people have been killed and 16 injured from a van that jumped onto a sidewalk and struck pedestrians in the north part of the city.

Deputy Police Chief Peter Yuen says the driver of the van is in custody but Yuen has not provided any possible cause or motive in Monday's incident. He says the investigation is continuing.

Yuen also has not given any details on the injuries.

Canada's minister of public safety says it's too soon to say whether the crash of a van into pedestrians in Toronto is a case of international terrorism.

Ralph Goodale tells reporters that police are still investigating to determine what happened and why in Monday's incident in northern Toronto in which a van struck a crowd of pedestrians.

He declines to confirm reports of the number of injured or whether there are any fatalities. Other authorities have said at least seven people were injured and a photo appears to show at least one person dead.

Goodale says Canada has not changed its terrorism alert level and he has no information that would suggest a need to do so.