Valentine's Day after 72 Years of Marriage in Mt. Pleasant 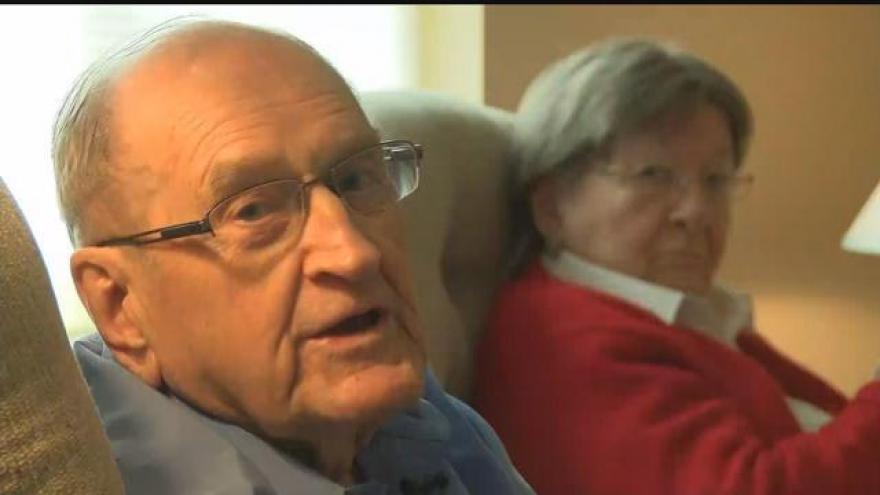 On Valentine's Day some couples might ask themselves "How did we get here?"

There's a long answer for a husband and wife in Racine County. They celebrated their 72 anniversary in 2016.

Glenn and Delores Coates live at Primrose Retirement Community in Mt. Pleasant. They say they like it there because they can still live together, even as Delores has developed dementia.

The couple doesn't have any Valentine's Day plans, but they like their normal routine.

"We have breakfast in our room every single day, and the menu is always the same," Glenn said, joking about his meal preparation.

Even though it's a grapefruit-every-morning kind of relationship, their connection actually started with a spur of the moment blind date when Glenn was on vacation in Duluth.

"Delores didn't think it was such a hot idea but anyway she agreed to go along," Glenn said.

"We headed off to Canada not realizing that it was Labor day, Canada was at war, and there were no gas stations open," Glenn said.

After their brief stranding across the border - they fell in love. But they would be a long distance still for years.

"Her mother and the postmaster in Duluth got to know each other because he was always delivering a special delivery to her on Sunday," Glenn said.

"I think being apart initially was a factor in never wanting to be apart," Glenn said.

Delores and Glenn's daughter, Cristie Leto, said the pair were always affectionate at home. She says she has boxes of their love letters saved.

Now the relationship is less verbal, but Glenn says being together is the most important thing.

"It really has been a wonderful life. And I kind of regret that Delores doesn't remember it too well. I remember it well," Glenn said.

"At least now we hold hands a lot because we help each other get around," Glenn said.

Glenn is a retired attorney who practiced in Racine. He gets help from CNAs at Primrose for the care of Delores.