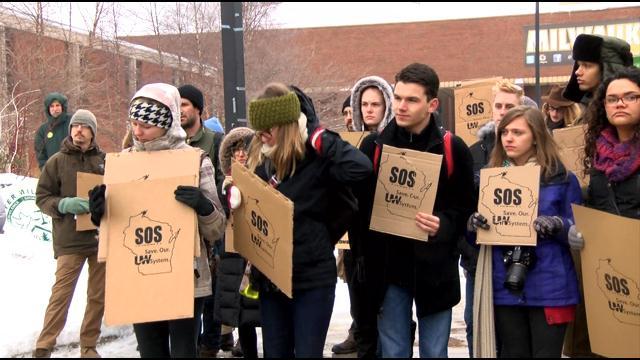 The proposed budget would cut funding to public universities by 13% which would be 300 million dollars over the next two years. Many fear the cuts would mean an increase in tuition.

\"The people that are going to suffer from this are associate professors, academic faculty, custodial staff,” said UWM student Chase Erwin.

Assistant professor Annie McClanahan says all you have to do is take a look at the past few years to know tuition will increase.

\"If you look at the history of the way these cuts were managed, they always make a raise in tuition,\" said McClanahan.

Right now, that's not possible. There's a tuition freeze that has been extended for the next two years.

However, the worry is for the students who will be entering the U-W system in a few years.

\"If we are going to do this, we don't want to see a big tuition increase two years down the road,\" said Senator Scott Fitzgerald.

McCanaham believes the increase is inevitable, if the budget is approved.

\"When the biggest cuts come down in 2017-2018 and there aren't any more tuition freezes, there is no other way to allow to let the state system continue functioning without a tuition increase,\" said McCanaham.

Walker has said this would give the university more freedom and independence, basically creating a public authority.