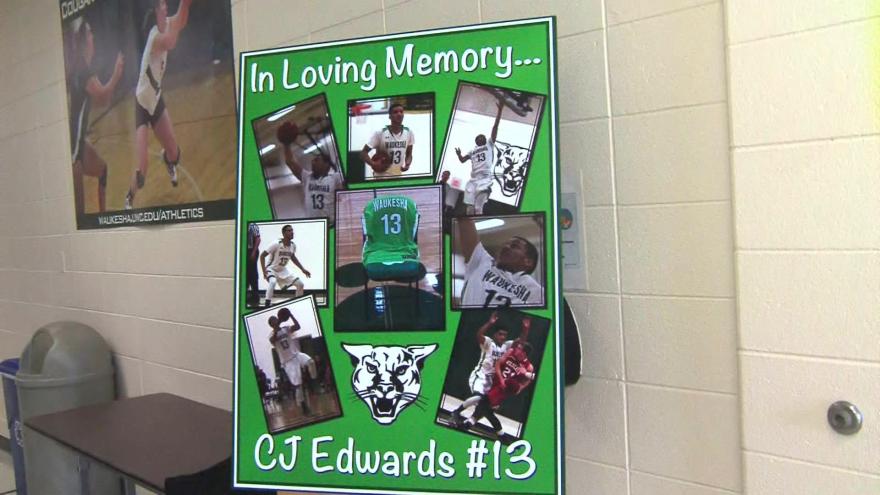 Roughly a week ago, a UW-Waukesha basketball player helped his team win a pretty important game. It would also be his last.

CJ Edwards and his younger brother were both shot to death inside their West Allis home. This weekend, the team friends and family honored CJ on the court.

There was one player missing at the UW-Waukesha Basketball game, but CJ Edwards teammates say even though they couldn't physically see him -

"The jersey is on the bench he was here with us," said Brett Ulner.

Edwards, a freshman, was already one of the cougar's star players.

"Very unselfish player. He was a do it all guy on the court, great defender, great shooter."

But those who knew him say CJ was much more than that.

"He was the most positive guy you will ever meet, he was always smiling," said Brett Ilinder.

"CJ was a young driven individual, he did everything he could for his family," said Michaelye Ross.

That includes risking his own life. CJ and his younger brother Tray Edwards were both at their home in West Allis on Sunday morning. When one of Tray's friends came over to play video games, he tried to rob them instead.

14-year-old Spencer Lewis is accused of shooting Tray. Then shooting CJ seconds later as he stepped in to defend his brother.

"He stepped in to save his brother, paid the ultimate price. He was always telling us how he would stick up for his brother. He would come to games, shoot around at half times, and you've got ten guys who felt like he was their brother as well," said the coach.

UW-Waukesha won their game against Manitowoc this afternoon. There will be a double funeral for the boys, Tuesday at Parklawn Assembly of God. The family says that the public is welcome to attend.