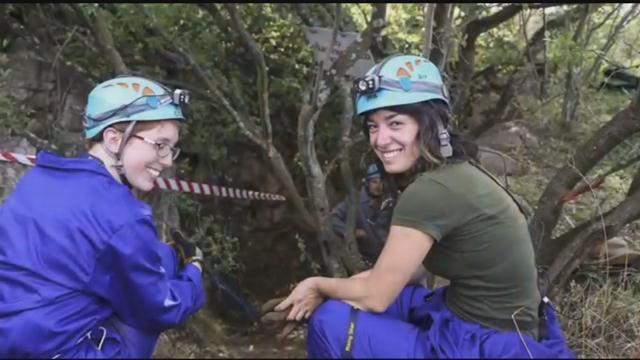 A new species of human ancestor is a scientific discovery raising eyebrows around the world. An international story with a local connection to Wisconsin.

University of Wisconsin researchers were among those who made the incredible find, including Alia Gurtov.

\"It's an unparallel discovery,\" said Gurtov, who was one of six lead excavators flown in to South Africa from the United States, Canada and Australia.

The journey to recover the fossils was treacherous. The excavators were hired because they were small and skinny enough to slip between narrow caves during the expedition called \"rising star.\"

\"The cave had several chokepoints but one of them has a minimum dimention of about seven inches, so they needed people who could go down,\" Gurtov said.

Once underground, they faced many challenges.

\"There are tons of bones... bones that could be damaged. They're incredibly soft and moist... not like the kind of fossils that most of us are familiar with so to get them out of the ground we had to use toothpastes and paintbrushes,\" Gurtov added.

Professor Lee Berger was the man in charge. He says they found nearly 1,500 well preserved bones and teeth and decided to name the fossils \"Homo Naledi,\" a new human like species.

\"It's got a tiny head and ape-like body but arms and legs that are very human-like something completely unexpected and we found it in incredible abundance,\" Berger said.

Although \"Homo Naledi\" is not human, it appears to have human behavior, according to the researchers.

It looks like they were intentionally depositing their dead in this chamber and that's a behavior that we don't associate with hominins until they look much more human like,\" said Gurtov.

The researchers believe \"Home Naledi\" is going to change the way they look at anthropology.

Gurtov was the only lead excavator from the University of Wisconsin-Madison, but Post-Doctoral Fellow Caroline Van Sickle also played an integral role in the discovery. Both Gurtov and Van Sickle are proud to represent the University in this historic finding.