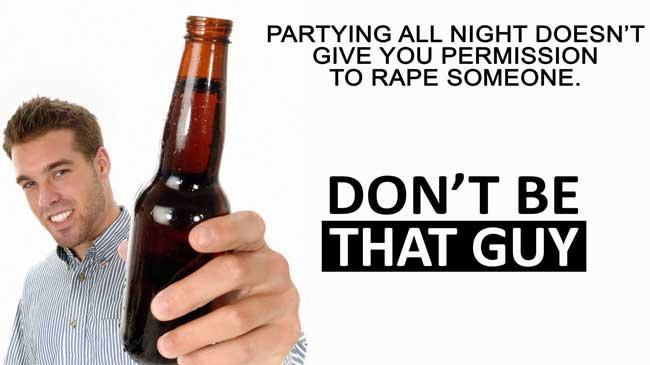 The UW-Madison Police Department has launched a new sexual assault awareness campaign, directly targeting potential perpetrators who are men.
The message is  “DON’T BE THAT GUY.”  The idea is to reach out to young men and remind them that sexual assault is not OK .
“Most sexual assaults occur between two people who know each other – it’s the not the stereotypical bad guy who’s lurking around a dark corner,” UWPD Chief Susan Riseling said. “So, we wanted to target those who we know are responsible for these crimes – we want to focus on consent and alcohol use. And that’s exactly what this campaign does.”
UWPD worked with University Health Services and End Violence on Campus  to craft and perfect messaging and images. UWPD also received feedback from students, as the campaign was being developed.
The UW-Madison Police Department modeled this campaign after similar campaigns in Canada and the United Kingdom. Only a handful of police departments in the United States have experimented with a version of “Don’t Be That Guy.”
The multi-faceted campaign consists of a poster series – nearly 600 posters have been distributed and posted in residence halls and other campus building. The campaign also uses ads on campus Madison Metro buses, table tents in dining halls, and TV displays in residence and dining halls. UWPD will also use its popular and successful social media channels to share campaign related messages and images.
“We’re really excited about this campaign,” Chief Riseling said. “We need people to understand that we take a hard stance against sexual assault at UW-Madison – and this is a step in the right direction for our university. Sexual assault is NEVER acceptable, and we need our students to realize that.”