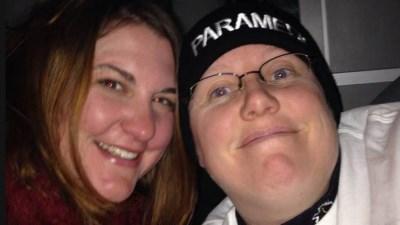 (CNN)They're a same-sex couple in Utah who've loved and cared for a 1-year-old girl for three months as foster parents. They want to adopt the baby.

Now, they're in danger of losing her.

Juvenile court Judge Scott Johansen ordered Tuesday that the child be removed from their home and sent "to a more traditional home," according to the Utah Division of Child and Family Services.

The parents, April Hoagland and Beckie Peirce, said they are shattered.

"Heartbreaking. We've been told to take care like a mother would and I'm her mother, and that's who she knows and she's just going to be taken away in seven days to probably another good, loving home," Hoagland told CNN affiliate KUTV. "But it's not fair, and it's not right, and it hurts me very badly, because I have done nothing wrong."

Later Thursday, the child services division said it was asking Johansen to reconsider, filing a motion with the judge to stay his order. If he declines, the agency said it would petition the court of appeals.

"It is DCFS's position that this removal is not in the best interest of the child," the agency said.

Hoagland and Peirce were legally married more than a year ago. They were approved as foster parents after passing home inspections, background checks and interviews with the division of family services. They are already raising Peirce's two children. They say the Utah division of Child and Family Services, the biological mother and others involved in the case are supportive of the couple.

But Johansen has objections. While he is not commenting publicly, the foster parents are.

"It also flies in the face of overwhelming evidence that children being raised by same-sex parents are just as healthy and well-adjusted as those with different-sex parents. At a time when so many children in foster care need loving homes, it is sickening to think that a child would be taken from caring parents who planned to adopt," Griffin said.

"This is the first time there has been an attempt to deprive gay foster parents of their rights to care for an adoptive child," said Callan. He said he expects to see a second wave of cases related to same-sex marriages, such as adoption, employment and other issues that the Supreme Court did not address.

"I believe it was a bizarre and highly unusual decision by the judge based most probably on religious beliefs rather than scientific facts," Callan said. He said the case would probably be overturned by Utah appeals courts.

Peirce said attorneys are still working on the case. She spoke to "Legal View's" Ashleigh Banfield on Thursday afternoon.

"I'm actually feeling very positive. Everybody has been positive. There's been a lot of support for us," Peirce said.

"We want to do what's best for the child and make sure she's taken care of in the way she should be. We don't want her bouncing back and forth."