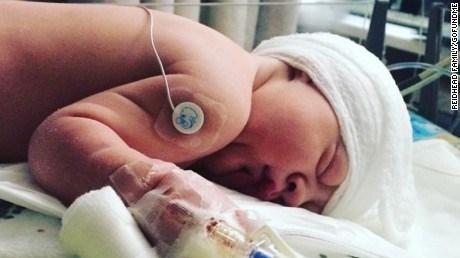 (CNN)Even as Ben and Alyssa Riedhead were expecting their first child, they were planning for his funeral.

Instead of clothes, they were picking out a casket. Instead of how to baby him, they were thinking about where to bury him.
Their unborn son had been diagnosed with encephalocele. It's a rare condition where the bones of the skull don't completely close. As a result, the brain starts developing outside the skull.
One out of every 10,000 babies born in the United States each year have this condition. And only half of them survive.
But baby William arrived this week -- alive and kicking. A 6 lb 12 oz fighter, breathing on his own and defying all the odds.
"Today we were supposed to mourn the death of our child," Alyssa Reidhaed posted on her blogMonday. "But instead we spent four glorious hours with him, holding him, playing with him, reading to him, and loving him."
The pregnancy had been painful.
The Reidheads found out about William's condition during the 20th week. They'd gone in to find out about the sex of the baby.
"We were going in for one of the happiest times of our lives and come out walking like we just heard the worst news we could've ever heard," Ben Reidhead, William's father, told CNN affiliate KSTU.
Alyssa started a blog to document their journey through this tough pregnancy.
They sought out different doctors and specialists. The prognosis was dire all around.
"They just kept saying, 'Oh, he'll be born but he'll only live for a couple minutes. Or if you go through labor, he'll probably pass away during labor,'" Alyssa Reidhead told CNN affiliate KSTU.
The Idaho couple settled on the Primary Children's Hospital in Utah. On May 17, the two drove there to begin the C-section.
"I cried when we got to the hospital explaining to Ben how it shouldn't be this way," posted Alyssa Reidhead on her blog. "Why couldn't my sweet William be a normal baby?"

They were anticipating the worst. But fortunately, it wasn't to be.

And they learned that as soon as William let out his first cry.
"The feeling of relief that came over me in that moment was one of the best feelings I ever felt," posted Alyssa Raeidheadon her blog.
Baby William was re-diagnosed with a different rare disease, cutis aplasia. He is missing the back of his skull and his brain is covered by a thin layer of membrane.
But he is recovering -- in the infant intensive care unit, on his stomach with his head bandaged.
"I don't know what the rest of his life will be like," Alyssa Reidhead posted. "Because of the development of his brain he will be a special needs child, and he is at a high risk for seizures."
For now, the new parents are enjoying spending time with their miracle baby.
"He is an active little guy that just loves to move around," Alyssa Reidhead wrote. "He loves his binky and sucking on his hand, he has a tight grip and a sweet little face."
Since the couple didn't plan on William surviving, they never had a baby shower or stocked up on the essentials: diapers, formula and clothes.
So, family members have started a GoFund me account to help raise money for medical costs and baby supplies.
"Take life one day at a time. Today, I am going to enjoy the fact that my sweet baby is alive and with me," she wrote.
Share this article: