Use of Force Down, According to new Milwaukee Police Report 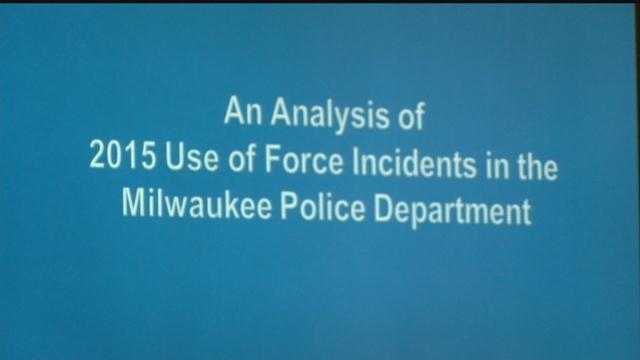 A new report reveals Milwaukee Police's use of force in 2015 is down two percent compared to the year before.

There were almost 700 instances where force was used last year. Chief Ed Flynn says with thousands of interactions with people each day, it shows use of force in Milwaukee is rare.

Flynn says the report actually shows that his officers are using restraint; while most of these situations involve armed suspects, police are mainly fighting back without weapons.

"The use of force by this department is an extraordinarily rare event. As Professor Brandler mentioned, we had more than 23,000 arrests last year and 2.7 percent of those resulted in use of force. Three quarters of which were basically wrestling and tackling. I think that's pretty astounding against the backdrop of the violence our officers are asked to contend with," said Chief Ed Flynn.

The definition of force is wide, including not only an officer firing a weapon, but also using a taser,  a K-9 or his or her own body.

In 2015 only 4 percent of the incidents reported involved a gun and just one was fatal.

But some community members believe incidents are going unreported and took issue with one officer-who had 10 reported incidents of force in 2015.

"It was explained away as the more arrests someone makes, the more inclined they are to be to use force. I guess I can't speak for everyone but I'm not satisfied with that explanation," said Mary Watkins, a concerned citizen.

Chief Flynn responded to these concerns, saying while it is a high number, the officer is a well respected member of the force who works in a high crime area. He says that officer has no citizen complaints from the incidents.

Also important to note: District seven, once the district with the most use of force incidents had a significant drop in the past year.