U.S. Workers Most at Risk From Robots 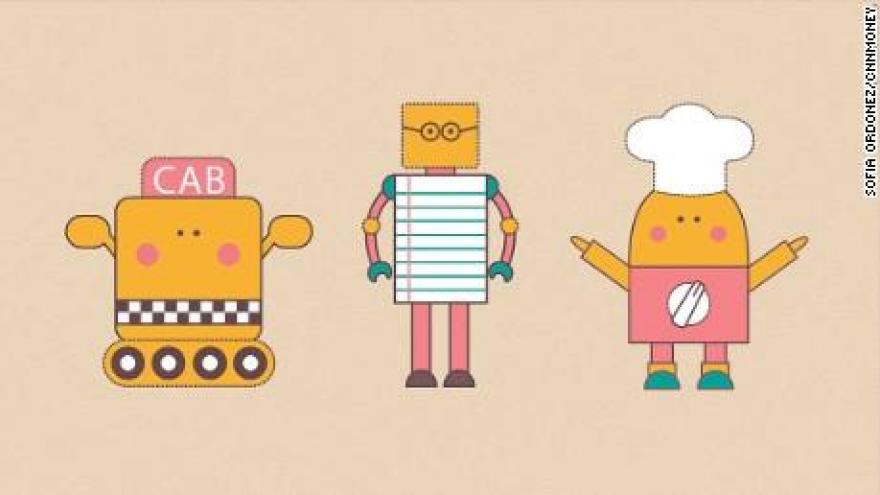 (CNN) Millions of workers around the world are at risk of losing their jobs to robots -- but Americans should be particularly worried.

Thirty-eight percent of jobs in the U.S. are at high risk of being replaced by robots and artificial intelligence over the next 15 years, according to a new report by PwC.

Meanwhile, only 30% of jobs in the U.K. are similarly endangered. The same level of risk applies to only 21% of positions in Japan.

The U.S. and U.K. labor markets are both dominated by services jobs, and roughly the same share of workers are employed in key sectors including finance, transportation, education, manufacturing and food services.

But PwC found major differences in the nature of the work done within these sectors that explains why more U.S. jobs are at risk.

Take financial services as an example. In the U.S., 61% of jobs in the sector are at a high risk of being replaced by robots. The same is true for only 32% of finance jobs in the U.K.

John Hawksworth, PwC's chief economist in the U.K., said that many workers in the U.S. financial sector are focused on domestic retail operations -- think bank tellers in small towns.

The U.K.'s finance sector, meanwhile, is much more focused on international finance and investment banking -- functions that require significantly higher levels of education and expertise.

Workers at risk in the U.S. "would be doing more routine tasks that are easier to automate than that of, say, an investment banker in London," Hawksworth said.

Related: Roomba will now tell you what part of your home is dirtiest

Workers shouldn't necessarily freak out about soaring unemployment due to a robot takeover.

The changing workforce will create more jobs in the future, but they'll likely go to higher skilled workers, said Hawksworth.

Expect a "restructuring of the jobs market," he said, noting that employment levels in many major economies are still quite high despite the encroachment of robots in the workplace.

People with jobs in education, health care and social work are the least at risk of being replaced, PwC said.

Related: Nissan shows how driving will become a desk job

"Creative and critical thinking will be highly valued, as will emotional intelligence," said Jon Andrews, head of technology and investments at PwC.

Workers that design and produce the robots, and have complementary skills to work alongside our artificial intelligence partners, will see more of the riches. Others could get left behind.

"The gap between rich and poor could get even wider," said Hawksworth.

Jobs at risk of automation, by country