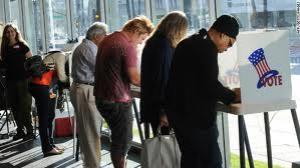 The U.S. Supreme court has now put the photo i.d. requirement on hold with a little more than three weeks before the election.

Last month, a federal appeals court reinstated the law, a decision that had voters and election officials scrambling to meet the requirement.

Mayor Tom Barrett, who had been preparing the city to deal with voter i.d. says he wasn't surprised because it was just too close to the election to change the requirement.

Republican lawmaker Glenn Grothman expressed disappointment telling CBS 58 News he can't believe the justices would go against the will of state lawmakers to protect the integrity of the voting process.

\"Implementing voter ID this close to the election has thrown our election process into disarray. Tonight's Supreme Court ruling is a victory for voters' rights that have been under repeated attack by Republicans for the past four years. Republicans have passed numerous voter suppression laws including severely limiting early voting and making it harder for seniors in residential facilities to vote.

\"Even one person who is prevented from exercising their constitutional right to vote is too many, and Assembly Democrats will continue to do everything possible to encourage people to vote and make voting accessible to all.\"

Dale Ho, director of the ACLU's Voting Rights Project issued a statement that said in part:

\"Today's order puts the brakes on the last-minute disruption and voter chaos created by this law going into effect so close to the election. It will help safeguard the vote for thousands of Wisconsinites as this case makes its way through the courts.\"