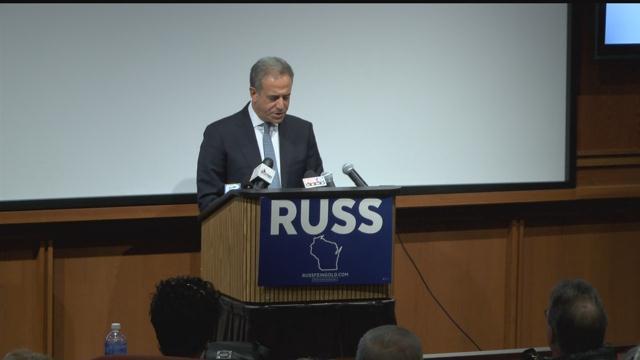 U.S Senate candidate Russ Feingold made a campaign stop in Milwaukee on Tuesday.

The long-term veteran senator spoke to about 100 members of the group Citizen Action of Wisconsin as part of a 72 County tour in Wisconsin.

Feingold spoke for about 20 minutes and laid out his economic priorities, which include calling for refinancing of student loans and paid family leave for parents.

However, what stood out the most to those who heard his speech is that he supports raising the minimum wage.

\"Americans who work full time deserve a living wage, so I believe we must look beyond incremental changes and aim to gradually increase the federal minimum wage to $15,\" Feingold said.

Members of the group Citizen Action of Wisconsin were glad to hear Feingold publicly support this issue.

\"It's been a big issue in Wisconsin and it's the first time Russ Feingold has ever endorsed it and we're pleased he chose to do it in front of members here in Milwaukee,\" said Robert Craig, Executive Director of Citizen Action of Wisconsin.