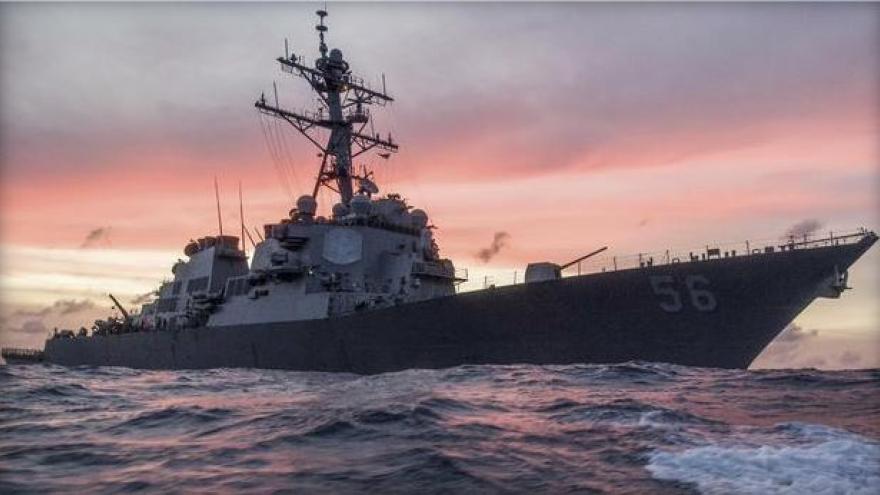 (CBSNews) The USS John S. McCain, a guided-missile destroyer, was involved in a collision early Monday with a merchant vessel east of Singapore and the Strait of Malacca, according to the U.S. Navy.

Search and rescue efforts are underway, U.S. Navy's 7th Fleet says. The Singaporean Navy is sending assets to assist and the USS America is en route to help. The collision was reported at 6:24 a.m. Japan Standard Time, according to the U.S. Navy.

"In addition to tug boats out of Singapore, the Republic of Singapore Navy ship RSS Gallant, RSN helicopters and Police Coast Guard vessel Basking Shark are currently in the area to render assistance,"  the Navy's statement read.

The ship was on its way to Singapore after finishing what the Navy called "routine patrols" in the South China Sea. One of those patrols was a Freedom of Navigation mission near contested islands which China has built and claims as their own in the South China around August 10.

Senator John McCain sent the following message on Twitter in response: "Cindy & I are keeping America's sailors aboard the USS John S McCain in our prayers tonight."

The Navy says the USS John S. McCain was commissioned in 1994 and carries a crew of 23 officers, 24 chief petty officers and 291 enlisted sailors.

The merchant vessel, Alnic MC, is a 30,000+ ton oil/chemical tanker built in 2007. It's 600 feet long and 105 feet wide and sails under the Liberian flag. Its owner according to searches is Energetic Tank Inc. and its operator is Stealth Maritime Corporation S.A.

This collision comes on the heels of another incident involving the USS Fitzgerald.

The captain of the destroyer, two senior officers and at least a dozen sailors are being disciplined for the horrifying collision that killed seven sailors in June off the coast of Japan.

Thirty-five sailors were asleep in a compartment when the bow of the Philippine ship punched a 17-by-13 foot hole in the Fitzgerald's hull. Seven sleeping closest to the hole drowned but 28 somehow made it out alive, even though the entire space was nearly flooded within 30 to 60 seconds.