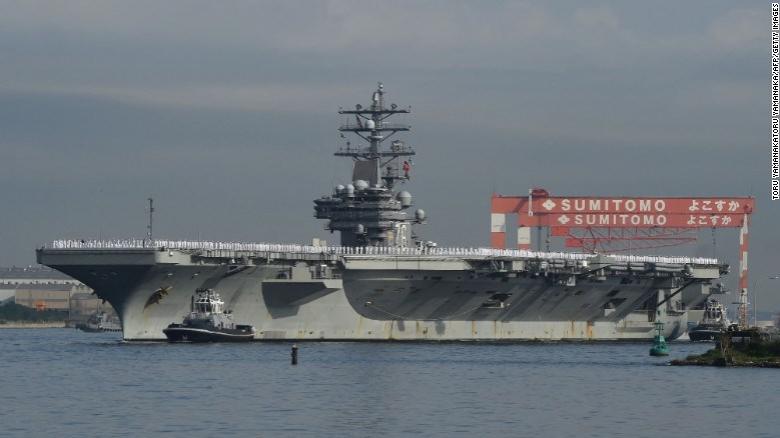 (CNN) All U.S. Navy sailors in Japan are banned from drinking alcohol and restricted to base except for essential trips after several recent alcohol-related incidents which the Navy's 7th Fleet said are harming U.S.-Japan relations.

"Effective immediately, sailors are prohibited from drinking alcohol, on and off base. Additionally, all off-base liberty will be curtailed," a statement from the 7th Fleet and U.S. Naval Forces Japan said Monday.

"These measures are not taken lightly," said Rear Adm. Matthew Carter, commander of Naval Forces Japan, said in the statement. "For decades, we have enjoyed a strong relationship with the people of Japan. It is imperative that each sailor understand how our actions affect that relationship, and the U.S.-Japan alliance as a whole."

About 19,000 personnel are assigned to U.S. Navy bases in Japan and Navy ships and planes operating from those bases, according to U.S. Forces Japan.

The Navy said that only essential travel would be allowed off base. That restriction would remain in effect until "face-to-face" training had taken place between all unit commanders and their sailors, it said.

The ban on alcohol will remain in effect indefinitely, until commanders "are comfortable that all personnel understand the impact of responsible behavior on the U.S.-Japan Alliance and the United States' ability to provide security and stability in the Indo-Asia-Pacific," the Navy said.

While family members, civilian personnel and members of other services are not covered by the order, Navy officials are encouraging their participation, according to a report from Stars and Stripes.

Monday's order comes after a Saturday traffic accident on Okinawa in which a U.S. Navy petty officer was accused of driving under the influence of alcohol, driving on the wrong side of the road, hitting two cars and injuring two people, according to reports in Stars and Stripes and the Japan Times.

In March, a U.S. sailor on Okinawa was arrested on suspicion of rape.

In May, a civilian contractor at a U.S. base in Okinawa was arrested in connection with the death of a 20-year-old woman.

During a visit to Japan last month, President Barack Obama apologized for the woman's murder.

"We want to see a crime like this prosecuted here in the same way that we would feel horrified and want to provide a sense of justice to a victim's family back in the U.S.," Obama told Japanese Prime Minister Shinzo Abe. "I think the Japanese people should know we are deeply moved and working with he Japanese government to prosecute not only this crime but prevent these kinds of crimes from happening again."

The Navy on Monday did not cite any of these specific incidents, citing rather the overall climate of relations.

"We will not condone misconduct that impacts our ability to conduct our mission or which jeopardizes our critical alliance with Japan," the commander of the 7th Fleet, Vice Adm. Joseph Aucoin, said in the Navy statement.

There are four major U.S. Navy bases in Japan, including Yokosuka Naval Base, Sasebo Naval Base, Okinawa Naval Base and Atsugi Naval Air Facility.

Yokosuka is the most important of those bases, being homeport to the aircraft carrier USS Ronald Reagan, the Navy's only forward-deployed carrier.