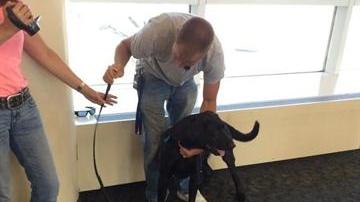 MILWAUKEE -- The reunion happened in the walkway towards concourse c at Mitchell Airport Friday.

Minton has been waiting for this for a long time. He said he was excited, nervous and happy waiting to get his dog.

Boo is 3 years old. But Minton hasn't seen him in a few years. They were separated after their stint in Afghanistan.

Minton said he's been working to get Boo back for a long time. The two worked together in Afghanistan searching for IEDs or bombs.  Boo was trained to do just that. The pair trained together in North Carolina.

Minton said the phrase was simply \"hunt it up\"  - that's the command for Boo to start searching for bombs - one he won't have to use anymore.

\"He'd patrol out in front of us,\" Minton, a U.S. Marine Corps Veteran Lance Corporal, said.  \"He was trained that way to be out in front. He'd be anywhere from 25 to 50 meters out there. When he'd alert on something he'd lay down and point at it - there's something here. I'd give him a you, say good job. We confirmed two of them over there. It was great because we were the only pair that got them.\"

He said he's going Saturday to get some dog food and toys for him.  This was all put together with the help of the Mission K9 Rescue organization.