U.S. Cities Ramp Up Security in Wake of Brussels Attacks 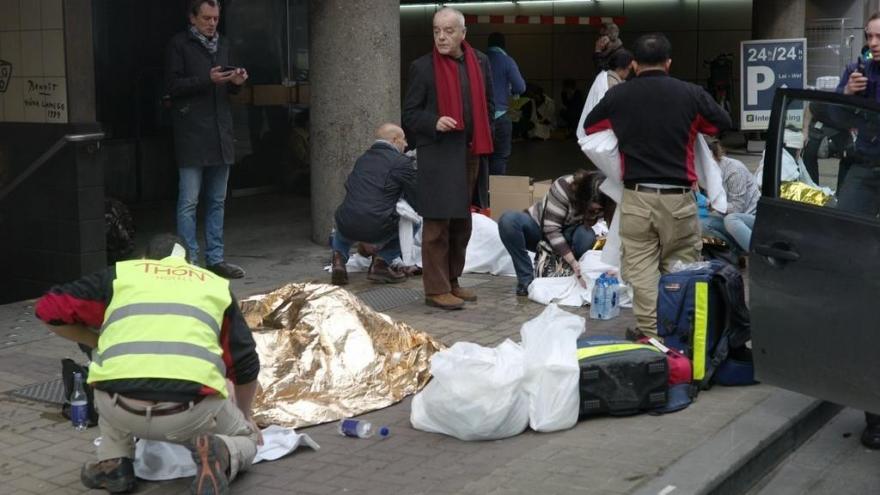 U.S. cities and airports have stepped up security in the wake of the explosions in Brussels Tuesday.

More than 30 people were killed when three explosions ripped through the Belgian capital, according to Belgian media.

One blast occurred at a subway station. Two more happened in the Brussels airport departure hall.

President Barack Obama, currently in Cuba on a foreign trip, has been informed of the events, which Belgian Prosecutor Frederic Van Leeuw called terrorist attacks.

U.S. Attorney General Loretta Lynch has also been briefed on the explosions, according to a Justice Department official. The Justice Department and the FBI are coordinating with other U.S. government agencies, as well as Belgian counterparts.

The U.S. was concerned about a strike prior to the attack, a U.S. official said.

After the Brussels terror arrests this week, the official said concerns were obvious and the U.S. was worried other members of the terror cell could go underground, or regroup and strike.

Turkey had been the constant threat stream in recent weeks, the official said.

This is an example of the post al-Qaeda world, striking at the local level, in very infancy attacks, and grabbing the world stage, the official said.

The Department of Homeland Security tweeted, "DHS will not hesitate to adjust our security posture, as appropriate, to protect the American people. #Brussels."

The New York Police Department will be stepping up security around New York subways and other sensitive areas in the city, though spokesman J. Peter Donald said "at this time, there is no known indication that the attack has any nexus to New York City."

"The department has deployed additional counterterrorism resources across the city including: the Counterterrorism Response Command, the Strategic Response Group and Hercules Teams," he said. "These teams have been deployed to crowded areas and transit locations around the city out of an abundance of caution to provide police presence and public reassurance as we closely follow the developing situation overseas."

The stepped up security also applies to the Long Island Rail Road transit system at Penn Station, Metro North at Grand Central Station and other major hubs like the Atlantic Terminal in Brooklyn, according to a Metropolitan Transit Authority senior law enforcement official.

In Washington, police across the Metropolitan Transportation Authority metro system will increase K9 sweeps and police patrols in the wake of terror attacks in Belgium, according to the agency's twitter feed.

There are also plans underway to roll out a major show of police force at Reagan National Airport and Dulles International Airport, in the Washington area, which will include SWAT, bomb sniffing K9's, and a general increase in police presence, according to an aviation official.

At Union Station in Washington, police are pulling random passengers as they are boarding to go through luggage security checks. ‎Not everyone is going through luggage checks, but bomb sniffing dogs are also out on the tracks doing sweeps.

Amtrak said in a statement it is working with state, local and federal officials and "extra officers have been deployed."

In Boston, a Massport official declined to elaborate on any security changes at Logan International Airport.

"Our airport security program is multi-layered and constantly evolving," Massport spokesman Matt Brelis told CNN. "We do not discuss specific tactics---including those that may rely on technology."

A spokeswoman for Los Angeles International Airport says at this time there are "no specific threats" but as a precaution they have increased the visibility of airport police.

Republican front-runner Donald Trump tweeted Tuesday that the U.S. must be vigilant and smart following the explosion.

"Do you all remember how beautiful and safe a place Brussels was. Not anymore, it is from a different world! U.S. must be vigilant and smart," he tweeted.

During an interview on Fox News, Trump said Brussels has transformed from a place of tranquility to an "armed camp."

"Twenty years ago, like a magical city, now you look at it its an armed camp, looking at pictures on TV now it's horrible," he said. "You want to lead your life, not live in armed camp, and certain group is making living a normal life impossible."

Ohio Gov. John Kasich said he was "sickened by the pictures of carnage."

"The wave of terror that has been unleashed in Europe and elsewhere around the world are attacks against our very way of life and against the democratic values upon which our political systems have been built," he said in a statement. "We and our allies must rededicate ourselves to these values of freedom and human rights. We must utterly reject the use of deadly acts of terror."

Though the attackers have yet to be identified, Texas Sen. Ted Cruz called the blasts "just the latest in a string of coordinated attacks by radical Islamic terrorists perpetrated those who are waging war against all who do not accept their extreme strain of Islam," in a Facebook post.

"Radical Islam is at war with us," he said, and accused Obama of refusing to "acknowledge this reality."