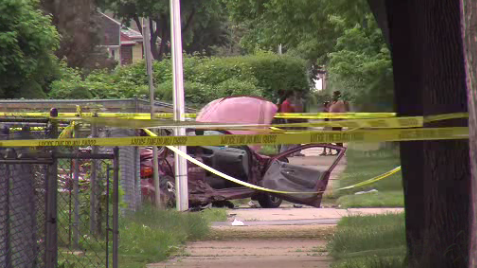 MILWAUKEE - The Milwaukee Police Department is investigating a fatal accident that involved a stolen car earlier this afternoon. Two young men were going west on Hadley Street in a stolen black 2011 Audi.They blew through a stop sign and t-boned a Hyundai Elantra which had the right of way on 39th Street. The young men in the stolen Audi fled the scene.

There were seven people total in the vehicle that was struck. One passenger, a 46-year-old woman, was ejected from the car and died at the scene. The 26 year-old-driver and the 28-year-old passenger are being treated at the hospital for their injuries.

There were four children in the car, as well. A 7-year-old and an 8-year-old are currently undergoing surgery for extremely critical injuries. One child was pulseless and not breathing on the scene but was resuscitated by fire personnel.

A 3-year-old and a 5-year-old also received non-life threatening injuries. All of the children currently remain in the hospital.

Witnesses tell CBS 58 it was the most horrific thing they've seen.

"I actually seen them fly," said Robert Sanders. "I ain't gonna be able to sleep tonight."

"Initially I heard a screech and I heard a blood curdling scream and so I ran out of my house," Mays said. "They think it's like grand theft auto. they're never the ones to die. It's always the people they hit."
Police released cellphone video of the suspects and ask anyone with information to call 414-935-7360.
Share this article: