NOW: 17-year-old from Illinois arrested in connection to shooting that left 2 dead during Kenosha unrest

KENOSHA, Wis. (CBS 58) -- A 17-year-old suspect from Antioch, Illinois, has been arrested and charged with first degree intentional homicide in connection to a shooting in Kenosha that left two dead and another hurt Tuesday night, Aug. 26.

The suspect, identified as Kyle Rittenhouse, a white 17-year-old, was armed with a rifle and part of a group pledging to protect property from demonstrators.

Based on police, witness, and video accounts, the first person was shot near 60th and Sheridan, the suspect then ran down toward 63rd Street, where the others were shot.

Dozens of cellphone videos of the shootings are circulating online. In one video, you see the suspect -- still armed with a rifle -- running from the scene of the first shooting. He then trips, falls to the ground and as people come near him, he opens fire. CBS 58 is not showing viewers the fired shots in the video, but you can see immediately after -- as he gets up -- one person is laying on the ground in the background.

The suspect then walks toward police, with the gun still hanging around his neck, hands up, but they drive past him.

CBS 58 asked law enforcement why Rittenhouse was not arrested at the scene.

"There’s screaming, there’s hollering, there's squad cars running, chanting, there’s BearCats, I don’t know where it was, but if the officer happened to be in the car, the radio traffic was non stop... and there were people running all over the place," said Kenosha County Sheriff David Beth.

Rittenhouse was part of a group open carrying rifles, claiming they were there to protect property from demonstrators. To open carry in Wisconsin, you have to be 18 years old.

Sheriff Beth said he believes the suspect was among a group that asked the sheriff to deputize citizens earlier in the day, to help assist law enforcement

"Why don’t you deputize citizens? And I’m like oh Hell no," Sheriff Beth said. "What happened last night is the perfect reason why I wouldn’t."

Officials say Rittenhouse is in custody of the Lake County Judicial System pending an extradition hearing to transfer custody from Illinois to Wisconsin.

KENOSHA, Wis. (CBS 58) -- Kenosha police are looking for a gunman who shot and killed two people and hurt another during a third night of violent unrest Tuesday, Aug. 25 into Wednesday, Aug. 26.

According to police, the shooting happened near 63rd and Sheridan around 11:45 p.m. One of the victims was identified by family as 26-year-old Anthony Huber from Silver Lake. The second person killed is 36 years old from Kenosha. A third victim, a 26-year-old man, was taken to the hospital for serious, but non-life threatening injuries.

This marks the third night of unrest following the shooting of Jacob Blake.

"It was insane. It was, I've never seen anything like that before in my life and honest to God I hope I never see it again because that was, it was traumatic," said Mike Holmen, witnessed shooting.

Witness Mike Holmen said when police tried to push protesters back, that's when shots were fired by an unknown man. One man was shot in the head and killed. The violence continued down the street.

"He shot someone in the stomach, fell down, tripped over someone then got up and shot another person in the arm," Holmen said.

See Also Protests erupt for 3rd night despite Kenosha curfew, National Guard presence increased
People ran from the area but Holmen says he wanted to first make sure the other two victims got help.

"We started screaming for the medics because we were hoping he was going to be OK and they rushed to him real quick. There were so many people around that had guns that you assume one shot is going to lead to more than one," said Holmen.

Video of the alleged shooter holding an AR-15 is circulating social media, but no one is in custody. Some Kenosha residents say they are hoping for peace after days of violence.

"We're still staying strong and I hope everyone else out there is too," Holmen said. "I pray for Jacob Blake's family. From what I heard she [Jacob's mother] wants to stay peaceful. They live here. It's their community too."

Kenosha police are asking anyone who witnessed the shootings or has video to call them immediately. 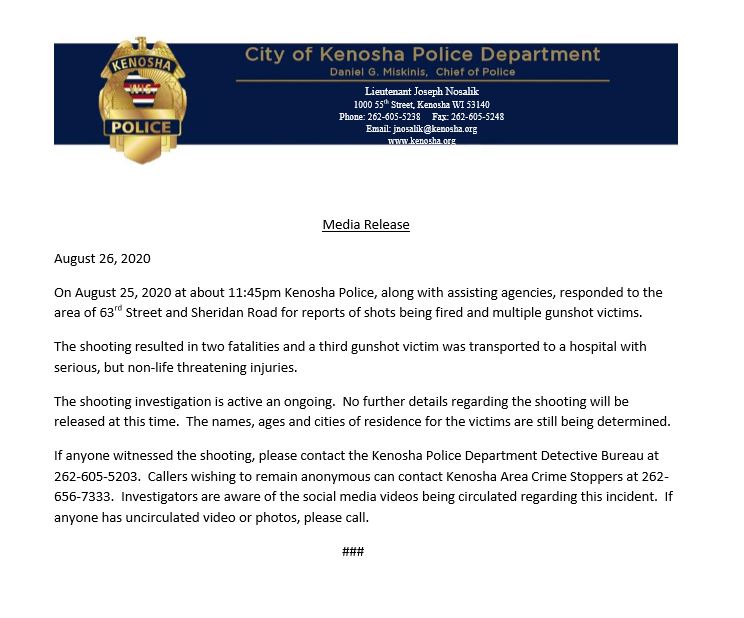 Authorities say an investigation is ongoing and no other information is being released at this time.

Kenosha County Sheriff David Beth told the New York Times one person had died and two others were hit after a shooting near a gas station/auto shop near 60th and Sheridan in Kenosha.

Our crew on scene heard several gunshots and saw hundreds of protesters scatter. One witness told CBS 58 he stayed with one of the victims until help arrived.

Law enforcement officials on scene tell CBS 58 they are aware of the images on social media.

After curfew began at 8 PM Tuesday, police and deputies began to push the remaining people out of the park in front of the Kenosha County Courthouse and onto Sheridan Rd. where the confrontation eventually occured.

This story will be updated