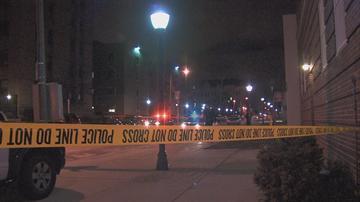 An uneasy feeling settled into Marquette University's campus Friday morning after three robberies and a suspect shot a student in the hand.

The robberies happened near student housing on 18th and Wisconsin Avenue around 2:30 a.m.  A suspect took a backpack, cellphone and wallet from two students.  Moments later, a second suspect approached another victim.

\"In a third robbery attempt in the same area a third victim struggled with an armed suspect and was shot in the hand,\" Milwaukee Police Captain Jason Smith said.

That student was treated at the hospital and released.  The suspects ran and police caught one with a gun just a few blocks away, but the other escaped.

Friday afternooon, police arrested a man they believe is the second suspect, but they're working to confirm his involvement.  The first arrested man hasn't been identified yet, but police say he has \"an extensive\" criminal record.

\"It's not a good feeling and I know Marquette's taking every action to prevent it from happening,\" Thomas said.  \"It just shakes you a little.\"

Along with simply calling 911 on your cell phone, anyone feeling unsafe can head to any of the several hundred blue light phones located on campus and speak directly with security.

\"This remains one of the safest urban campuses in the country,\" Captain Smith said.  \"Nearly every square foot of this campus is covered  by security video.\"

Public safety monitors that video from about 600 cameras and takes calls in the command center on campus.

\"This is truly a statement about criminals believing they are engaging vulnerable victims and targets, when actually they are attacking the most protected group, certainly, in this area of the city,\" Smith said.

Students can also call for rides from Marquette's LIMO program or request a \"safe walk,\" where up to three people will walk a student to their destination.

\"We know we're in the city, we know we're downtown, we know that crime is going to happen,\" Thomas said.  \"Here's what we want you to do and we will try our best to make you safe.\"