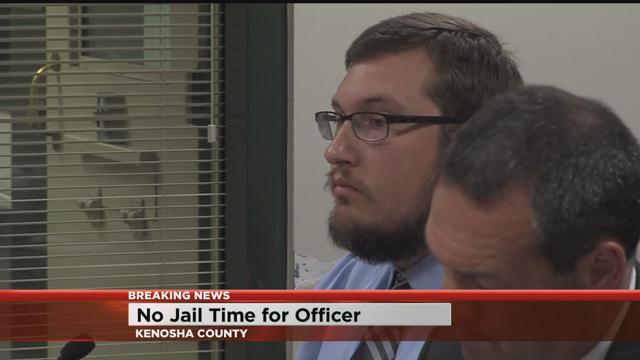 Kyle Baars was charged with planting a bullet and an ID card in a backpack while conducting a search in a 2014 murder investigation. In April the 29-year-old plead guilty to felony misconduct in public office. Despite Baars’ actions, the suspects in the murder case were ultimately convicted. Baars resigned from the department last year...

Wednesday the disgraced officer was sentenced two years, one in prison and one on probation, but the prison portion of the sentence was stayed.

At the sentencing hearing, the prosecutor and the defense attorney agreed that if Baars hadn't come forward, the planted evidence would likely have gone unnoticed.

“I am also asking for your mercy,” Baars said in part of his 15-minute speech to the court.

Through tears, former Kenosha Police officer begged a judge not to send him to prison, arguing he did the right thing by admitting he planted evidence.

“This was not uncovered,” Baars said. “I was not confronted with this. I was literally the first person to bring this to the attention of the appropriate people.”

The prosecutor commended the officer for coming forward, but added that doesn't undo actions that could have let a murder go free.

“The defendant wore a badge and carried a gun,” said James Martin, a Milwaukee County Deputy District Attorney who was assigned the case to avoid a conflict of interest. ”When he became a Kenosha police officer he took an oath.”

Baars' attorney, Mark Richards, told the judge his client panicked when he planted the bullet and ID card.

“The fact of not having ever seen a murder victim before and being afraid that something like this, the people who did it go free,” Richard said.

And though Baars says he accepts responsibility, he also claims he was told by the Kenosha County District Attorney that by testifying in the murder trial, he would not be prosecuted.

“To be honest I can't help but feel I've been penalized for trying to do the right thing,” Baars said.

The prosecution and judge deny that claim.

“People should be able to trust law enforcement and you violated that trust,” said Judge Chad Kerkman.

Before handing down the sentence, Kerkman made it clear Baars has only himself to blame.

“You seem to be blaming others,” Kerkman said. “You're the person who put yourself in that seat right now.”

In addition to the year of probation, Baars will have to complete 80 hours of community service.

A former Kenosha Police Officer found guilty of planting evidence has just been sentenced and he will not spend any additional time behind bars.

Kyle Baars was handed a two year sentence today 1 year in prison and 1 year on probation, but the judge stayed the prison sentence.

Baars pleaded guilty to felony misconduct in public office after he admitted on the witness stand at another trial that he planted evidence on the scene of a shooting death investigation back in 2014.

He resigned from the department last year.