UPDATE: Milwaukee's Mayor Gets in Dunk Tank for Krueger Classic at O'Briens Pub 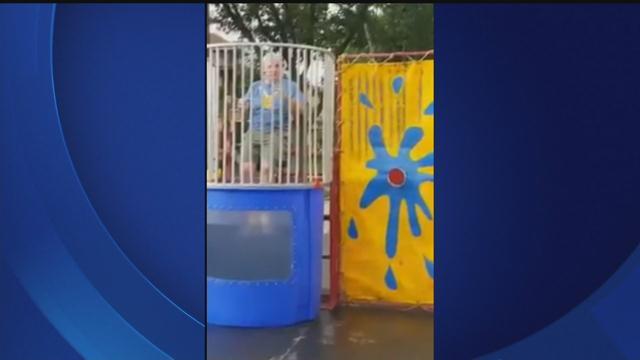 UPDATED STORY: Milwaukee Mayor Tom Barrett surprised many on Saturday when he volunteered to get in a dunk tank to help raise money for a local tavern worker who is in organ failure.

Mayor Barrett popped by the annual Krueger Classic, a kickball tournament at Wick Park that then turns into a pig roast and celebration at O'Brien's Pub across the street.

Organizers say several people pitched in several hundred dollars to see the mayor get all wet. Which he did. He then raised his arms in victory once he emerged from the giant tub of water.

ORIGINAL STORY: On Saturday, August 6th, from 11 am-11 p.m. O'Brien's Pub will host a kickball tournament, complete with a pig roast and raffle and silent auction items for a local woman who is in a real fight for her life.

They call it the Krueger Classic. Last year, it was held to raise money for Andrew Krueger, a local father who was blind sided by blood cancer.

A year later and Andrew has gotten well enough to enroll for a master's degree program and welcome a third child with his wife Liz.

The two of them wanted to pay it forward and when they heard about one of Andrew's co-workers, they just had to step in.

Jules Haas underwent surgery to correct an Atrial Fibrillation problem with her heart.

Things did not go well.

She is now in organ failure and is on the waiting list for a transplant.

Jules has been a longtime volunteer in the community, most notably with Hunger Task Force.

Now the tables are turned and the Kruegers are convinced the community will answer the call once again.

The Krueger Classic for Jules Haas is this Saturday, August 6th at O'Brien's Irish Pub at 4928 W. Vliet Street in Milwaukee.

The kickball will happen at Wick Park across the street.

A portion of the street will be closed for a pig roast. There will also be a dunk tanks, silent auction and chicken roast.

The event is family friends until 8 p.m. with additional festivities going on for adults until 11 p.m.