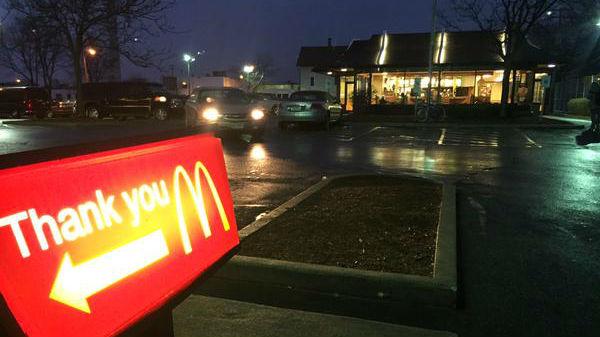 “We respect people's right to peacefully protest, and our restaurants remain open every day with the focus on providing an exceptional experience for our customers. Yesterday,  McDonald's USA announced a wage increase and paid time off  for employees at its company-owned restaurants and expanded educational opportunities for all restaurant employees throughout the U.S.  This is an important and meaningful first step as we continue to look at opportunities that will make a difference for our employees. The independent franchisees set wages for their own employees based on the local marketplace.”

McDonald's plans to increase hourly wages by more than 10% for roughly 90,000 workers -- a move that follows in the footsteps of retail giants Walmart and T.J. Maxx and new state minimum wage laws across the country.

Effective July 1st, McDonald's starting wages will be at least $1 an hour more than the minimum wage set by local law, the fast-food chain announced Wednesday. All employees up to restaurant managers will get a pay bump as well.

The result: the fast food giant projects that its average hourly wage will reach more than $10 an hour by the end of 2016 -- up from $9.01 currently. The new average will be $2.75 above the federal minimum wage.

However, there are other perks for all 750,000 workers working at any McDonald's location. Here's a look at the new offerings:

Free high-school completion: McDonald's said it will pay for employees at any company or franchise-owned location to take classes required to earn a high-school diploma through a national program.

Financial assistance for college: The chain also said it would assist with college credits and tuition assistance, though more details were not immediately provided.

Classes for non-English speakers: The company will also expand it's offering of free English language classes for workers.

Paid Time off: Starting in July, full- and part-time employees with at least one year of experience who work at a company-owned location will begin to accrue paid time off. An employee who works an average of 20 hours a week, for example, would earn about 20 hours of paid time off in a year.

New CEO Steve Easterbrook said in a statement that the pay raise, along with the boost in benefits, was in response to employee surveys and is aimed at improving its business.

\"We know that a motivated workforce leads to better customer service so we believe this initial step not only benefits our employees,\" he said. \"It will improve the McDonald's restaurant experience.\"

The news comes on the heels of a wave of good news for low wage workers, who have staged protests across the country demanding higher pay.

In February, Walmart said it would institute a series of pay raises for workers so they will receive at least $9 an hour this month and $10 an hour next year. The parent company of T.J. Maxx, Marshall's and Home Goods made a similar announcement the same month.

But one McDonald's worker said the wage hike isn't enough.

\"This is too little to make a real difference, and covers only a fraction of workers,\" Kwanza Brooks, a McDonald's worker from Charlotte, North Carolina said in a statement issued in response to the news. \"We're going to keep fighting until we win $15 and union rights for all fast-food workers and our families.\"

In Milwaukee, workers will be responding to the announcement with a protest.  It's set for 10 a.m. at the McDonald's at 920 North Ave.