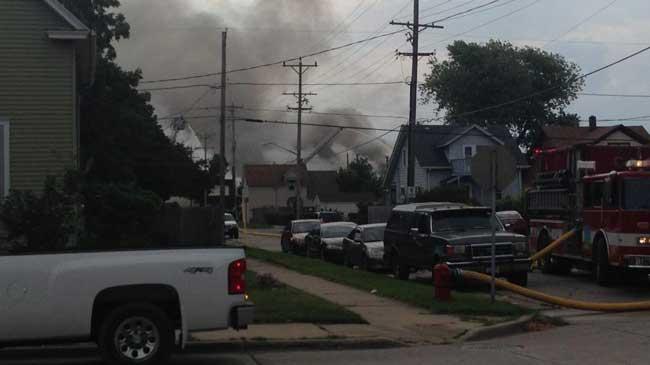 Kenosha Fire Department is on the scene of a fire of former Bastrup Roofing and Supply 6411 28th Avenue. The fire department was called to the scene around 8:21 AM.
Other fire departments are assisting.
The street is lined with fire trucks at 30th Avenue.
It is believed to be an abandoned building.
No firefighters have been injured.
Fire Chief said building is a total loss.
Fire Chief said there is quite a bit of asphalt in the building.
We Energies called said that it was about 1,500 customers without power. As of 10:30 AM only about 150 are still without power until the fire and police tell them they can restore power to those final customers.
The power was cut to surrounding homes as precaution, especially because they had to launch the tall ladder hoses. Working with We Energies to establish power.
Fire is suspicious in nature, padlocks on building were still intact so they don't believe anyone was inside.
No evidence of any combustibles or anything inside yet. Cause of fire is unknown. Heat and humidity a tough challenge for firefighters today.
Firefighters were drinking lots of water, Gatorade. 10 different companies, at least 36 total firefighters on scene. Fire is under control, continuing to monitor hot spots.
They expect to be on scene for several more hours.
Three tall jets of water now being sprayed on the fire, smoke filling several blocks.
Smoke became darker around 10:00 AM. This fire is certainly taking a while to extinguish.
Reports are smoke can be seen  over from the lakefront. Smoke is covering a lot of the city.
Share this article: