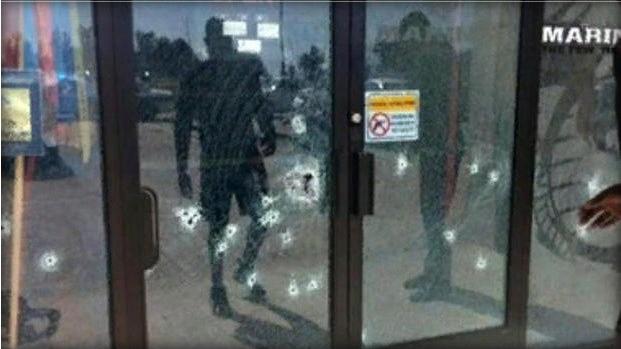 Four Marines were killed in Thursday's shooting in Chattanooga, Tennessee, a senior defense official told CNN's Barbara Starr. The families of those killed are being notified of their deaths, the official said.

U.S. Attorney Bill Killian earlier told reporters that authorities were treating the shooting as an \"act of domestic terrorism.\"

Gunshots were fired at a military recruiting center and a Navy Reserve center in different parts of Chattanooga, Tennessee, late Thursday morning, officials and witnesses said.

One officer is \"down\" in connection with the shootings, Chattanooga Mayor Andy Berke told reporters. He was not specific about the officer's condition.

Witnesses said a man sprayed bullets at the glass doors of a military recruiting center at a strip mall on Lee Highway, and the U.S. Navy tweeted Thursday that a shooting happened at a separate location -- the Navy Reserve center on Amnicola Highway. The two sites are 7½ miles apart.

Gina Mule, a server at a restaurant, said she saw a man who'd been in a silver convertible Mustang, firing a \"high-powered rifle\" at the recruiting offices at about 10:50 a.m.

She said she first heard \"Pow, pow, pow!\" She then went to a window, through which she said she saw the man firing shots.

A second witness, April Grimmett, said she was working at a hair salon near the recruiting center when she looked out a window and saw a man ducking in between cars.

\"Shortly after that, we heard the (shots). It was very loud and very fast,\" Grimmett said, without saying what happened to the man she had seen.

A photo that she took shows glass doors damaged by the gunfire.

\"I could not believe how many bullet holes were in that door. It was insane,\" she said.

Fred Wright, a salesman at a nearby auto parts store, told CNN that after he heard gunshots, three people ran into the shop, hollering they thought \"someone was shooting at them.\"

\"Horrific incident in our community,\" Berke, the mayor, tweeted. \"We will release details as they are confirmed. Prayers to all those affected.\"

Photos posted on Twitter by media outlets showed police blocking a road and a large number of patrol cars.

Chattanooga State Community College asked people on its main campus to stay inside because of a \"confirmed shooting,\" the school said on Twitter.

Memorial Hospital in Chattanooga is \"on precautionary lockdown\" due to the shooting reports, hospital system spokeswoman Lisa McCluskey said.

\"We have not received any shooting victims,\" McCluskey said. \"We are still accepting new patients.\" The lockdown, she said, \"is just a precautionary measure.\"