UPDATE: DOT reports all lanes are now open in Ozaukee County along I-43 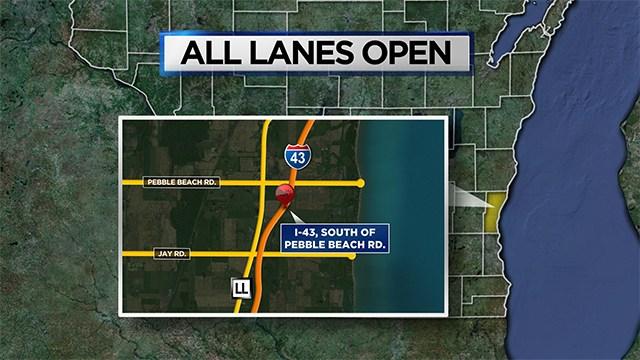 The Department of Transportation reports that all lanes of I-43 are open in Ozaukee County.

For a time, both north and south bound lanes of the highway were closed due to a deadly traffic accident Tuesday night.

The crash happened just south of Pebble Beach Rd along I-43 around 6:30 last night.  Officials tell CBS 58 that a car sped away when a State Trooper tried to pull it over.  The Driver eventually lost control, crossed the median and hit a Semi that was traveling along I-43 SB.  The driver of the car was killed.  The driver of the Semi was not hurt.

Police say they found drug paraphernalia and a handgun in the car, which had been reported stolen from Milwaukee.

The northbound lanes of I-43 opened shortly after 4 am this morning.  Southbound lanes were finally open to traffic around 5:20 a.m. when the Semi was removed from the roadway.