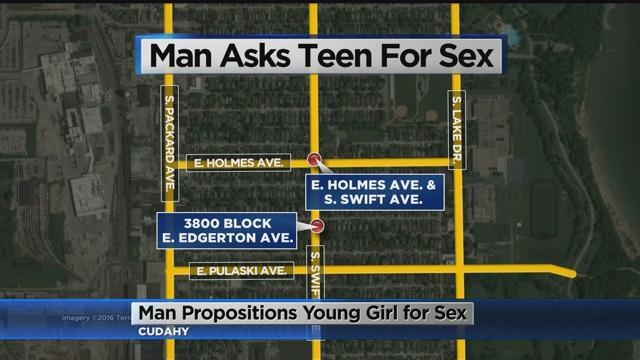 Nearly a day after the incident, police tell CBS58, they're in the search phase, trying to find a man that propositioned a 13-year-old girl for sex.

He propositioned her for sex and made sexual comments three times as he followed her home. This happened at 4 o'clock, when it was still light out.

CBS58 spoke to a family friend who says the 13-year-old is okay and back at school. Although, she is still shaken up.

One of the encounters happened on Danielle Morales' block.

"That's why we keep our doors locked, and I keep my kids close, and they don't really run the neighborhood. I make sure I can see them," said Morales.

The mother says her daughter warned her about the enticement.

"[I'm] a little shocked and nervous to know there's someone out there doing that," said Morales.

This all happened within blocks of the high school, two elementary schools and the police station in Cudahy.

"That makes me even more uneasy," said neighbor Michael Brown.

As of Wednesday evening, police report they haven't gotten any tips. Anyone with information is asked to call Cudahy Police at (414) 769-2260.

Cudahy Police are looking for a man who approached a 13-year-old female on Tuesday afternoon and asked her for sex.

The male drove up to the girl who was walking home and made sexual comments to her and also propositioned her for sex.

The suspect approached the girl a total of three times. On the first instance, he drove by the female without contact. The suspect then drove by the female a second time near S. Swift and E. Holmes Avenue, making a sexual comment. Finally, coming in contact with her for a third time, in the 3800 block of E. Edgerton Avenue when he stopped his vehicle and asked the victim for sex.

The suspect left the area, last seen westbound from the 3800 block of E. Edgerton Avenue.

The victim describes the suspect as a white male, average to slightly heavy build, late 20's to early 30's, with a long (chest length) brown colored beard. The suspect is also described as wearing a baseball hat and driving a blue or gray colored vehicle, possibly a newer model 4-door.

Anyone with further information should contact Cudahy Police at 414-769-2260.