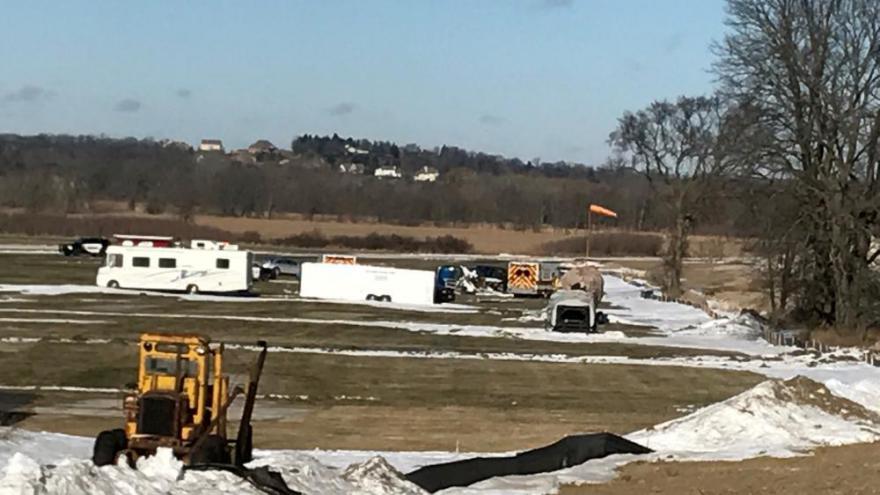 UPDATE-- A family of three, including an infant, were on board a small plane that crashed during take-off at an airport in Waukesha County.

The crash happened around noon Wednesday. The single engine plane went off the runway and crashed in to an unoccupied SUV.

“The airplane itself appears to have significant damage as does the parked vehicle and the trailer that was crashed in to,” said Captain Phil Horter with the Brookfield Police Department.

The family was heading home to Virginia after visiting family in Waukesha County for the holidays. The 41-year-old pilot and his 37-year-old wife were seriously injured. Miraculously their 6-month-old son, who was in a child seat, was not hurt.

“The infant did not appear to be injured at all, but was taken to the hospital to be checked out,” Horter said.

Jake Replogle, the owner of Jake’s Restaurant, which looks out on to the airport, says he's never seen anything like this happen.

“I happened to talk to someone who’s' been working with us for 20 plus years and they can't recall anything as well,” Replogle said.

Replogle saw the plane on the runway and left to run errands minutes before the crash.

“I ended up just seeing a plane out there just doing a routine warm up, thought nothing else of it,” Replogle said.

Police say it's too soon to say if weather conditions played a part in the crash, but Replogle says the airport is pretty quiet on cold, windy days.

“I routinely see a lot less planes going in and out on days like this,” Replogle said.

The Brookfield Police Department handled the initial investigation, but it's now in the hands of the FAA and the NTSB. The airport will be closed until at least noon Thursday.

A plane has crashed in Brookfield near 21500 block of Gumina Road.

According to Brookfield Police, the plane crashed into an unoccupied truck and trailer.

There was small child 6 and 12 months old on the plane, but appeared to be unharmed.

According to police, there were three passengers on board the plane.

Two passengers went to the hospital by ambulance and one went by Flight For Life.

All patients were conscious.

According Brookfield Police Department, passengers were from out of state.

FAA and Brookfield Police Department will be investigating.

Thank you to Culver's for the photos.

View a web cam from the airport at this link.