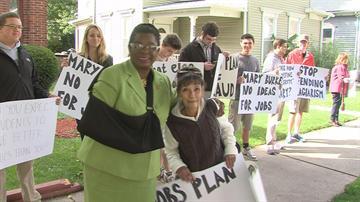 UPDATE: Eric Harris with Gwen Moore's office responded to CBS 58 about the interaction on Sunday and said:

\"The Congresswoman is a friendly woman, she's always willing to talk with anyone who would like to engage her in a dialogue about the state of our district,\" Harris said. \"And she certainly welcomes a diverse set of opinions and ideologies.The Congresswoman meant no offense by putting her arm around this woman, she merely did so instinctually, in order to cool down what appeared to be a highly animated protester, nothing more to it.\"

When asked if the Congresswoman regretted putting her hands on the protester:

RACINE- Tense moments at a campaign stop for Mary Burke in Racine on Sunday as Congresswoman Gwen Moore and a protester clashed.

About a dozen protesters were there standing against Burke after accusations that she plagiarized her jobs plan surfaced.

Moore was at the event to speak with Burke at a Town Hall style meeting.

The confrontation happened before the event and outside the Bray Center.

At a point during the exchange, the Congresswoman hugs the protester with one arm.

That protester did not want to be hugged by Moore and asked to be let go.

The two also traded words on the Governor, jobs, the VA, and Medicaid.

CBS 58 reached out to Moore's staff about what happened, but have not heard back yet.