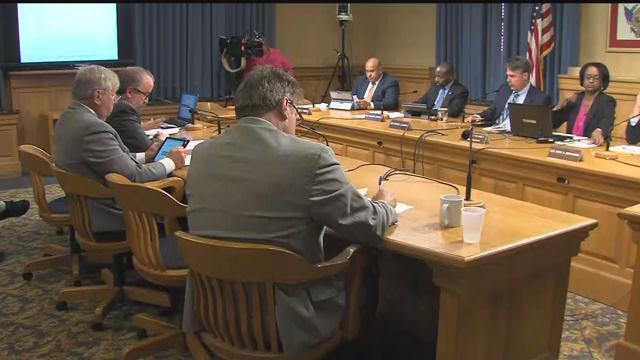 Monday, July 25, 2016 6:08 p.m --- The City of Milwaukee Common Council's Judiciary and Legislation Committee has decided to put the proposal on hold.

It would need to be approved by the committee and the full common council before it would become a referendum question on the ballot in November.

The "surge force" would add 150 officers to the Milwaukee Police force over 5 years.

Alderman Witkowski says adding 150 officers is reactive to the violence in the city, and proactive for the future numbers of the force.

"If indeed there is great concern about crime, then this will go forward. If we find out there is not great concern of crime in the City of Milwaukee then it will fail either at committee level, council level, or by the voters," said Alderman Witkowski.

With the current budget, Witkowski says three library branches, the health department, the department of city development and the municipal court would have to be cut to cover the cost of 150 officers. That's why he's asking for the extra officers to be paid for by taxpayers. It would mean an increase in property taxes. About 47 cents for every 1000 dollars on a home's worth. For example, if your home is worth $150,000, you would pay an extra $70 per year in taxes.

Alderman Mark Borkowski, who sits on the Judiciary and Legislation Committee says officers need to be added in some capacity.

"We're actually a hamster on a wheel. We haven't gotten very far. So, one way or another we're going to have to do something because we can't just sit back and let officers retire without doing something," said Alderman Mark Borkowski (District 11).

The action is called a surge force because by 2021, between retirements, and the normal revolving-door, police numbers will be roughly what they are now if the surge is adopted.

The city's budget and management director Says mayor Barrett doesn't oppose this proposal, but has some concerns about it. Saying there are state dollars to add officers that shouldn't be overlooked.

"The concern is the way the initiative is framed; over two years we would lose approximately $17 Million dollars of state aid, and would have to substitute local property taxes, and that's a major concern," said Mark Nicolini, City of Milwaukee Budget & Management Director.

Nicolini says under the proposal, for two years, taxpayers will be paying about double the cost for each officer.

Monday, July 25, 2016 2:25 p.m. --- The city of Milwaukee Common Council's Judiciary and Legislation Committee is set to meet Monday afternoon. They will introduce a proposal aimed to reduce violence in Milwaukee. The special meeting will discuss a "surge force."

A plan to hire a so-called Surge Force of 150 Milwaukee Police Officers over the next 5 years will be discussed at a special meeting of the judiciary and legislation committee.

It would increase property taxes, city voters would be asked whether to approve it in a referendum.

The full council would first have to decide whether to put the proposal on the ballot this November.