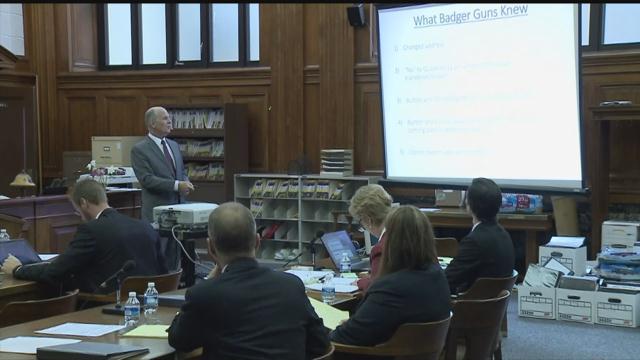 The Badger Guns civil trial filed by two Milwaukee Police officers is now in the hands of jurors. The Two officers are suing Badger Guns for negligence after they didn't stop a straw purchase.

Badger Guns attorneys wrapped up their closing arguments Monday saying the jury should focus on the "real criminal", the shooter, not the gun store.

Jurors will have to decide if Badger Guns is responsible for at least five claims of negligence, plus past and future health care expenses.

Officers Bryan Norberg and Graham Kunisch filed the civil suit after they say Badger Guns sold a gun to Jacob Collins in a straw purchase, that was actually intended for Julius Burton.

Burton, who was underage, later shot Kunisch and Norberg in the face, both survived with injuries.

The attorneys for the officers talked about how the officers will never be the same--facing brain and shoulder injuries. But Badger Guns attorneys say Julius Burton, the shooter is the real criminal in the case and the gun store was also duped by the criminals.

"When you feel the emotions, humiliated by scar, you're embarrassed by the way you act, worried about future because of what happened to you, you're distressed about what will happen next those are real worries," said the officers attorney Patrick Dunphy.

The jury will now deliberate more than a dozen questions and should have a decision on Tuesday.

Stay with CBS 58 as we continue to follow this developing story.