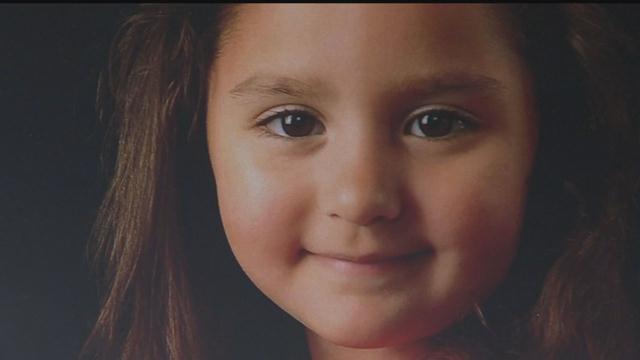 Laylah Petersen's family has justice for her death according to the prosecutor in the case. Around 3 p.m. on Thursday, the jury delivered a guilty verdict for Carl Barrett, one of two gunmen in the shooting that killed the 5-year-old in 2014.

The jury delivered their unanimous verdict, finding Carl Barrett guilty on all four counts, after less than three hours of deliberation.

The Courtroom was full for the verdict and as it was read there were sobs and sighs from Barrett's family and Laylah's family.

Investigations found Carl Barrett was the second gunman in shooting. The state claiming during closing arguments, Barrett is a "backup" or "muscle" for someone who needs another shooter. In the case of this shooting, Barrett was "backup" for Arlis Gordon, who wanted revenge after a man accused of killing his half brother was acquitted, but nearly a dozen bullets were fired into the wrong home, taking Laylah's life.

"Milwaukee Police Department was doggedly investigating this case from day one and like I said in the closing there was a bit of a conspiracy of silence among the people who knew information about early on, in particular the participants. One member of the community who was familiar with the people involved heard some things and came forward," said Sara Beth Hill, Prosecuting Attorney.

The jury deliberated on three counts of recklessly endangering safety. One for each of Layla's grandparents and sister who were in the home when nearly a dozen shots came through their front window. One count of homicide because one of those bullets went through Laylah's skull and killed her. The twelve jurors were unanimous in their decision.

"I would like this verdict to send the massage that pause and think about your actions before you take them and maybe not go armed everywhere... but I think had [Arlis Gordon] maybe had time to reflect on those emotions and take in a pause maybe this wouldn't have happened," said Hill.

The jury was sent off around 11:00 AM to deliberate.

As the lawyers had their last chance to speak to the jury before deliberation, the defense said Carl Barrett had no motive, the witnesses lied on the stand, and said the second shooter wasn't Carl Barrett, but Divonte Forbes.

Forbes was in the car when the shooting happened, but was not charged in Laylah Petersen's death.

The state says the other shooter had the motive, but argued Carl Barrett was the "back up man" he had a gun and would use it if anyone asked.

Two other men were charged in Laylah Petersen's death. Arlis Gordon, the other gunman plead guilty to a reckless homicide charge last week.

Paul Farr, the driver of the car, testified in Carl Barrett's trial, and will be sentenced next month.

Soon Carl Barrett's fate will be up to a jury.

Barrett is accused of shooting and killing 5 year old Laylah Petersen. He and another gunmen allegedly sent nearly a dozen shots into the wrong home during a revenge shooting.

After three days in court, the testimony finished.

As Laylah Petersen's family were in the gallery Wednesday, the entire courtroom heard the gunshots that went through the front picture window of Margarita and Robert Fogl's home and killed Laylah Petersen.

The shots were captured from three separate sensors through the Milwaukee Police Shot Spotter technology.

The jury heard from one of the accused in the shooting on Wednesday. Paul Farr is testifying at Carl Barrett's trial as a part of his plea agreement. He plead guilty to harboring and aiding a felon. Farr will be sentenced next month.

Farr is believed to be the driver of the car, when Carl Barrett and another gunman shot into Laylah Petersen's grandparent's home.

Farr says there was no plan or discussion about a shooting while he, Barrett, Arlis Gordon, and Divonte Forbes were in the car. Farr also didn't see the shooting, but he did see Carl Barrett and Arlis Gordon get out of his car. Then, he heard the shots, and later that day overheard a conversation between the suspected gunmen. Arlis Gordon said to Carl Barrett he, "shot the whole thing up."

Farr was worried his friends had killed Laylah Petersen that night, and became emotional and even grabbed a tissue when speaking about why he came forward about the shooting.

In the afternoon, the courtroom was turned over to the defense. The defense deferred an opening statement and called just one witness.

The witness was a detective in the case, Catherine Spano. The questions surrounded the clothing Carl Barrett was wearing on November 6, 2014 when Laylah Petersen was killed. Earlier in the trial, a witness says the shooting suspects were wearing all black.
Defense Attorney: Then you asked him at some point during that conversation what Mr. Barrett was wearing, correct?
Detective Spano: Yes.
Defense Attorney:  What did he tell you.
Detective Spano: He said that Mr. Barrett was wearing the same thing he always wears. A dark blue Adidas jacket with tan cargo pants.

Thursday the jury will hear closing arguments, and then deliberate the four counts Carl Barrett faces, including a homicide charge for Laylah Petersen's death.

The  trial continued for Carl Barrett, one of the gunmen accused of shooting and killing Laylah Petersen.
The 5-year-old girl died in 2014, while she was inside sitting on her grandfather's lap. It is believed two gunmen shot at the wrong home in a revenge shooting.

After hearing from the 5-year-old’s grandmother yesterday, the state began to connect the gun used in her death to other shootings.

The state's case connects a gun used in multiple shootings to the one that killed Laylah Petersen. Nearly all afternoon this afternoon was the testimony of Divonte Forbes. The prosecution claims it was his gun that was used to shoot Laylah -- and he was in the car when it all happened.

Forbes is not charged in Laylah Petersen's death because he didn't fire a weapon.

On the stand, he described the moments the shooting happened. He says Carl Barrett got out of the car when he heard shots, and Forbes explained he was in the car to get the gun he borrowed to Arlis Gordon back. Arlis Gordon was charged with first degree reckless homicide. He recently pleaded guilty to second degree reckless homicide. He will be sentenced in the coming months.

According to prosecutors “fathead” is Carl Barrett's nickname. PJ is the nickname for Paul Farr.
Forbes agreed to testify as part of a plea agreement.
While Forbes was cross examined, the defense questioned whether he could even remember what happened – pointing to the fact he admitted he was high on marijuana.

Defense: You don't know where you picked him up. Is that your testimony?
Forbes: Don't know.
Defense: You're not even aware of what part of town you're in?
Forbes: No,
Defense: Because you're so high?
Forbes: Yep.
Defense: It's fair to say, is it not, that the time you were in that car... during the gun exchange, you were extremely high?
Forbes: I could still function.

Paul Forbes, who plead guilty to harboring and aiding a felon in this case is expected to testify Wednesday.

Monday, the trial started for one of the men accused of killing the 5-year-old.

Laylah Petersen's family was present in the gallery, and some couldn't hold back tears recalling the night they lost the 5-year-old.

On the other side of the courtroom was defendant, Carl Barrett, one of the men accused of shooting into the house that night.

The jury heard from their first witness Monday afternoon.

A haunting fact in the case is well known; Laylah was sitting on her grandfathers lap as shots rang into their home.

Her grandparents recalled that night, as they were the first to take the witness stand. Grandmother, Margarita Fogl spent a minute wiping tears from her eyes before she was able to answer the prosecutor.

"We're sitting there, and all I hear is a 'bing' at the picture window, and I said, 'What the heck was that?' and I felt a whoosh over my head, and then I heard 'boom boom boom.' Three or four bangs, and all of a sudden Robert says get to the floor, get to the floor," said Fogl.

The defense was quiet during day one of the trial. Laylah Petersen's grandparents and many other witnesses were not cross examined. The defense deferred their opening statement. The defense for Carl Barrett will speak directly to the jury after the state calls all their witnesses.

The other two men accused in Laylah's murder, Arlis Gordon and Paul Farr, have plead guilty. They are expected to testify in Barrett's case and will be sentenced in the coming months.