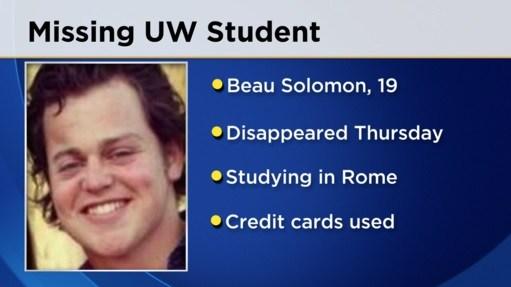 "John Cabot University is deeply saddened to announce that the body of Beau Solomon, the missing American visiting student, has been found in the Tiber River. We express our most heartfelt condolences to the Solomon family and to all those who loved Beau."

ORIGINAL: Police are looking for 19-year-old Beau Solomon, who is said to be missing in Italy.

Authorities say the UW student from Sauk County disappeared on Thursday while he was with his friends at a bar in Rome.

Solomon is studying abroad at John Cabot University in Italy.

His family says someone has been using his credit cards since he disappeared.

Now they are speaking out, asking for help from anyone that may have seen Beau. His family is asking you share his picture across social media with the hope that someone might recognize him.