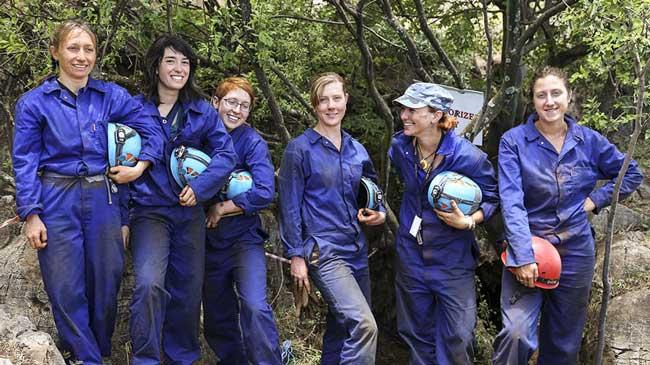 (CNN) When an amateur caver and university geologist arrived at Lee Berger's house one night in late 2013 with a fragment of a fossil jawbone in hand, they broke out the beers and called National Geographic.

Berger, a professor at the University of the Witwatersrand in Johannesburg, South Africa, had unearthed some major finds before. But he knew he had something big on his hands.

What he didn't know at the time is that it would shake up our understanding of the progress of human evolution and even pose new questions about our identity.

Two years after they were tipped off by cavers plumbing the depths of the limestone tunnels in the Rising Star Cave outside Johannesburg, Berger and his team have discovered what they say is a new addition to our family tree.

The team is calling this new species of human relative \"Homo naledi,\" and they say it appears to have buried its dead -- a behavior scientists previously thought was limited to humans.

Berger's team came up with the startling theory just days after reaching the place where the fossils -- consisting of infants, children, adults and elderly individuals -- were found, in a previously isolated chamber within the cave.

The team believes that the chamber, located 30 meters underground in the Cradle of Humanity world heritage site, was a burial ground -- and that Homo naledi could have used fire to light the way.

\"There is no damage from predators, there is no sign of a catastrophe. We had to come to the inevitable conclusion that Homo naledi, a non-human species of hominid, was deliberately disposing of its dead in that dark chamber. Why, we don't know,\" Berger told CNN.

The moment of discovery of 'naledi,' I would have probably said to you that it was our defining character. The idea of burial of the dead or ritualized body disposal is something utterly uniquely human.\"

Standing at the entrance to the cave this week, Berger said: \"We have just encountered another species that perhaps thought about its own mortality, and went to great risk and effort to dispose of its dead in a deep, remote, chamber right behind us.\"

\"It absolutely questions what makes us human. And I don't think we know anymore what does.\"

The first undisputed human burial dates to some 100,000 years ago, but because Berger's team hasn't yet been able to date naledi's fossils, they aren't clear how significant their theory is.

Berger tried to put the new find into perspective.

\"This is like opening up Tutankhamen's tomb,\" he said. \"It is that extreme and perhaps that influential in this stage of our history.\"

Almost human but not quite

Homo naledi is a strange mosaic of the ancient and the thoroughly modern.

Naledi's brain was no bigger than an orange, scientists say. Its hands are superficially human-like, but the finger bones are locked into a curve -- a trait that suggests climbing and tool-using capabilities.

Homo naledi was relatively big: it stood about 5 feet tall, had long legs, and its feet are almost identical to ours, suggesting it had the ability to walk long distances.

\"Overall, Homo naledi looks like one of the most primitive members of our genus, but it also has some surprisingly human-like features, enough to warrant placing it in the genus Homo,\" says John Hawks of the University of Wisconsin-Madison, a senior author on the papers describing the new species that were published Thursday.

The scientists can make these claims, in part, because of the sheer scale of the find.

In the vault at the University of Witwatersrand, hundreds of priceless specimens lie in padded cases across the room.

So far they've unearthed more than 1,500 fossil remains in total -- the largest single hominin find yet revealed on the continent of Africa, the cradle of human evolution.

Gathering the fossils was dangerous work.

Berger, a National Geographic Explorer-in-Residence, was already well-known for his discovery of \"Australopithecus sediba,\" another species of human ancestor, in 2008. But this expedition would face unique challenges.

The fossils were found at the end of a series of chambers and tight squeezes deep underground, some 90 meters (100 yards) from the cave entrance. To get there, scientists would have to squeeze through a 7-inch wide cave opening.

A field of bones

In the first few days of the expedition, the biggest problem was knowing where to step.

\"The first thing that you would see, especially in the early stages of the investigation, was just bones. Bone debris everywhere,\" says K. Lindsay Hunter, an American scientist and one of the \"astronauts\" on the Rising Star expeditions, which were conducted in November 2013 and March 2014.

Marina Elliott, another of Berger's astronauts, described the scene underground as \"some of the most difficult and dangerous conditions ever encountered in the search for human origins.\"

Some scientists in this field spend an entire career finding one fragment to identify a possible new species. But early on, the team knew they had stumbled onto something extraordinary.

Initially, Berger thought that they might find no more than a single skeleton. But he says that almost all the bones they found -- besides a few rodent and bird remains that came into the cave much later -- were from Homo naledi.

\"We found everything from infants to babies to toddlers to teens, young adults, old individuals. It is like nothing that we could have ever imagined,\" says Berger. \"Homo naledi is already practically the best-known fossil member of our lineage.\"

The team claims to have uncovered remains of at some 15 distinct individuals, but say this is only the beginning.

\"The chamber has not given up all its secrets,\" Berger says. \"There are potentially hundreds if not thousands of remains of Homo naledi still down there.\"

Berger says their discovery raises haunting questions about our deep past, and about our very identity. Many mysteries remain, and other scientists may well challenge some of the team's controversial conclusions. But few will dispute that Homo naledi is truly significant.

Years of careful exploration lie ahead. \"This was right under our nose,\" says Berger. \"And we didn't see it. What else is out there?\"