UNION GROVE, Wis. (CBS 58) -- A Union Grove woman used to carry her mother around her neck, close to her heart every day.

But on June 23rd, she lost the pendant that carried the ashes that meant the world to her.

“When I lost it, it was like everything stopped,” Vivian Moorehead said.

Moorehead says she was out running errands on June 23rd, her birthday, when she realized the pendant was no longer on the chain.

“I remember playing with it, and that was it,” she said.

Moorehead is the mother of three boys and remembers being in the baby aisle at Target in Pleasant Prairie when she saw it last. 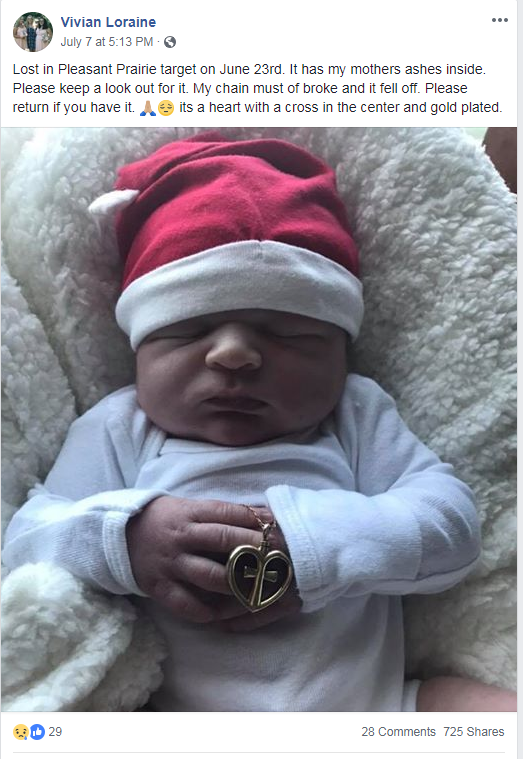 “My biggest fear is that someone found it and thinks that it’s solid gold, but it’s not. It has her ashes inside,” she said.

The gold pendant is heart-shaped with a cross.

“It was very pretty and it just reminded me of her,” Moorehead said.

Moorehead’s mother died from suicide back in 2013. She says this was the only thing she had left of her.

“She was my best friend and I don't have her anymore, she said. “It's like somebody has a piece of her and I would be so grateful if I could get it back.”

Moorehead says she retraced her steps and called all the places she was that day, but no luck.

She says she wore the necklace every day for the last five years.

“I couldn’t express how happy it would make me to get it back,” Moorehead said. “It’s on my mind every single day. When I wake up, I think about it. I think of where may I not have looked. What if I did lose it somewhere else?”

Target said they've checked their lost and found and their safe, but no one has turned in Vivian's pendant yet.