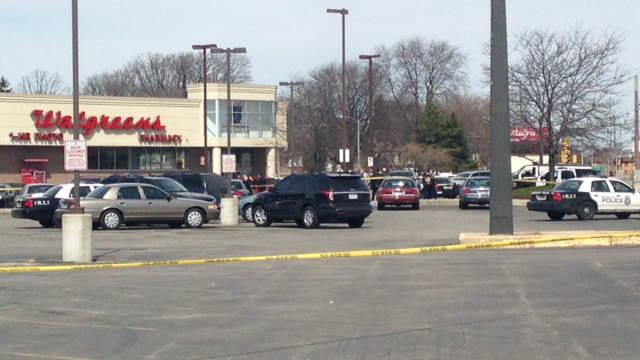 Police are investigating an officer-involved shooting that occurred Wednesday morning during a robbery at the Walgreens near Hampton Ave. and Fond Du Lac Rd.

Two hooded-men with masks entered the pharmacy, while another waited in a car, Police Chief Ed Flynn said. One of the suspects was shot once by a 22-year veteran.

Flynn said that this is the second pharmacy robbery of the day during a brief statement given at the scene.

The Chief said he is limited on what he can say given the relatively new state law that requires the Department of Criminal Investigation to be the lead investigative body on officer involved shootings.

It happened just before 10 a.m. that a special unit investigating a rash of drug store robberies noticed two suspects enter the store. The 57-year-old plain clothes officer fired once at an armed suspect inside the store.

A firearm was recovered at the scene, but the Chief said he was forbidden to get into any detail and characterize a sequence of events.

The Chief did confirm at least half a dozen recent robberies saying \"it's become fashionable\" to steal prescription medicines for resale on the street.

All three suspects are technically in custody. The suspect who was shot is at Froedhert Hospital being treated for serious injuries. This is the latest in a series of violent incidents involving guns in the past week in the City of Milwaukee.

\"Our officers know they're in a dangerous situation.\" said Chief Flynn. \"A lot if shots fired. A lot if gun play.\"

Malcolm L. Hunt is an elder at the Least of These International Ministries. He said his church leaders are meeting to help fight the violence in their communities.

\"A lot of people talking about leaving this city because of all the violence,\" Hunt said. \"We know that if we don't address it by the time it warms up and kids are out, it's going to be like the Wild Wild West.\"

\"It's something that we can't sit down and wait,\" he said. \"No, we have to start doing something right now.\"

Rick Broady has lived in Milwaukee for 62 years. He said crime doesn't have a time of preference.