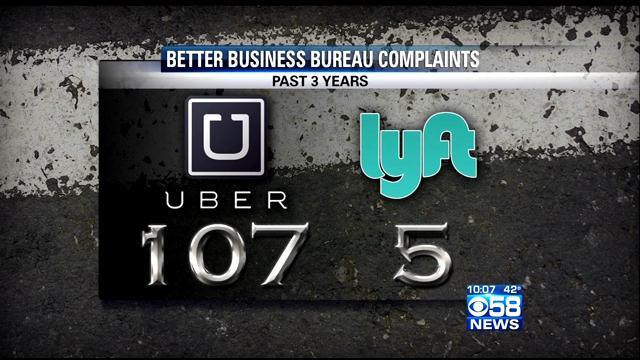 Over the past three years, Uber has received more than 100 complaints, and Lyft received five complaints.

Most of the complaints center price surging, based on supply and demand.

That means if Uber and Lyft drivers receive a lot of phone calls on any particular day, the price for a ride can potentially go up ten times the normal cost.

Uber responded with a statement:

“Uber's direct channel for two-way feedback is regularly reviewed and acted on to ensure a high-quality experience. The fact is that consumers in 220 cities around the world have made their opinion known by taking millions of rides with Uber.”

CBS 58 spoke with Chris Ulicki, a Milwaukee resident who has used Uber.

Ulicki said the price is worth the convenience.

CBS 58 also called and emailed the company Lyft, but the company has not provided any kind of statement.

If you would like to see the full reports conducted by the Better Business Bureau on Uber and Lyft, click on newslinks.