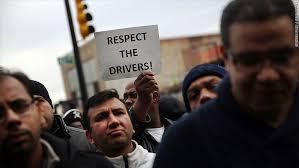 (CNN) --Those working with the leading on-demand company have a demand of their own: a fair minimum wage.

Uber drivers are planning to take to the streets on Tuesday as part of a broader protest calling for a $15 hourly minimum wage.

"Hundreds" of drivers will protest alongside fast food workers, airport employees and home care aides for what is being billed as a "Day of Disruption," according to Fight for 15, the group organizing the effort.

In San Francisco, Uber's hometown, drivers are planning to march at the airport with signs that say, "Your Uber Driver is Arriving Striking." In other cities, drivers will idle their cars or march with low wage workers from other sectors.

Related: Is Uber's push for self-driving cars a job killer?

"Everyone says the gig economy is the future of work, but if we want to make that future a bright one, we need to join together like fast-food workers have in the Fight for $15 and demand an economy that works for all," Justin Berisie, an Uber driver base in Denver, said in a statement.

Reps for Uber did not immediately respond to a request for comment.

Uber has previously said drivers in its top 20 U.S. markets make an average of more than $19 per hour, but that doesn't include "driver-partners' expenses" like gas, car repairs and insurance.

Drivers in some cities have also complained that Uber's aggressive fare cuts make it harder to scrape by with those additional costs factored in.

Unlike fast food workers, Uber drivers are considered contractors rather than employees. For that reason, they are not entitled to overtime pay or sick leave.

Fight for 15 has organized protests throughout the country since launching in 2012. New York, California and Washington D.C. have each voted to approve a $15 minimum wage.

The latest "Fight for $15" protest takes place just weeks after Donald Trump's victory. The president-elect flip-flopped during the campaign on the issue of raising the minimum wage and suggested the decision should fall to the states rather than the federal government.