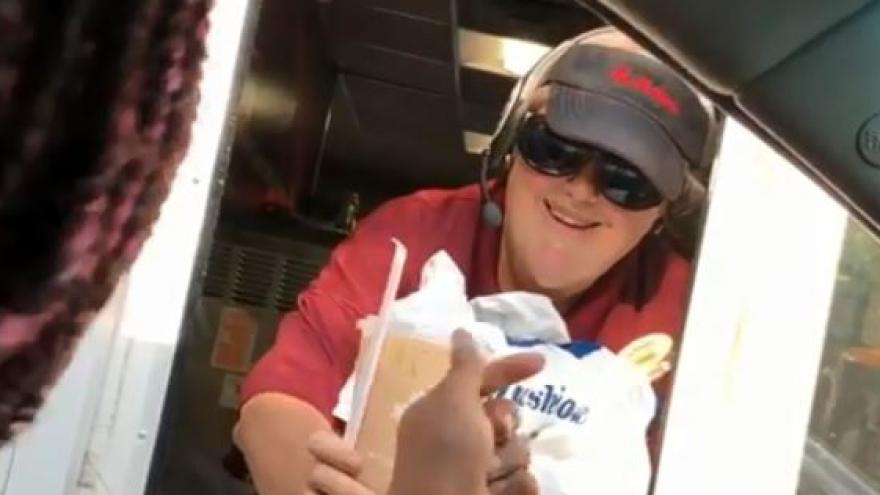 (CBSNews) -- An Uber driver from Buffalo, New York, is going viral for her random act of kindness towards a woman she met while driving. Lamiyah Jabbar says she drives for Uber in her spare time. One morning, she picked up a woman who was going to work at Tim Hortons.

On the way from the woman's house to her job, she started opening up to Jabbar. "She was communicating to me how she takes care of grandkids and because she takes care of her grandkids, she doesn't really have money leftover to be able to buy herself stuff," Jabbar told CBS News.

"She was hoping to be able to get a new dress for church and a robe and house shoes for Christmas," Jabbar said. "And during the conversation, I couldn't help but think, 'I'm someone who doesn't have to wait until Christmas for something as simple as a robe, house shoes and a new dress.'"

Jabbar didn't want the woman to have to wait until Christmas, either. She dropped the woman off at work, learning only her first name: Diane. Then, Jabbar went off the clock; instead of picking up more passengers, she went to the mall.

Jabbar went to several stores and asked women who looked to be around Diane's size what kind of clothes they wore. Jabbar ended up buying a $50 visa gift card and a dress she thought Diane might like. Then, she went to the Tim Horton's drive-through.

Jabbar said she loves doing random acts of kindness like this all the time. "I don't usually record it because I don't need to record it," she said. This time, however, she wanted to capture the expression on the recipient's face.

When Jabbar pulled up, Diane didn't immediately remember her. "This morning I gave you an Uber ride to work," Jabbar told Diane through her car window.

Jabbar explained to Diane that she went out and bought her a church dress after their conversation and Diane couldn't believe it. "Oh, you're so sweet," she said from the drive-through window. "Thank you so much! This has been such a horrible day. You just made my day!"

Jabbar told CBS News it's just in her nature to help people like Diane. "I'm one of those people who's like, you can't tell me your issues and I can't move on without helping," she said. She knew immediately she had to buy Diane the gifts she was waiting all year for.

The video of Diane's reaction has been viewed more than 18,000 times and serves as an example of how a small deed could mean the world to someone.