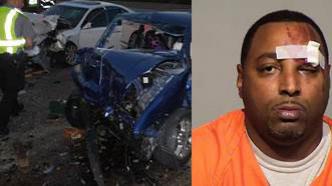 A Milwaukee man with a .14 PBT struck head-on a woman with two young children in her vehicle on Sunday at 4:30 AM.

According to the Milwaukee County Sheriff’s Office, the wrong way driver entered I-43 northbound from the Fond du Lac exit ramp and struck another vehicle head on at I-43 northbound and Wells Street at 4:30 AM.

He did not have a valid driver’s license, and was driving a white Lexus.

Biami was transported to the hospital by a Milwaukee Fire and Med unit for lacerations and a fractured ankle. He could not remember where he had been drinking, only that he was drinking Patrón.

A 28-year-old woman from Stagger, Illinois, driving a Ford Escort, was struck head-on by Biami’s vehicle.  She was initially found to be pulseless and not breathing, and had to be extricated from the vehicle.  She was resuscitated at the scene by MFD and transported to Froedtert Hospital with serious injuries, to include broken ribs, kidney hematoma, fractured right arm, fractures of both legs, and injury to her right lung.

Biami faces the following felony charges, which carry up to 88 years in prison if convicted:

The northbound freeway was shut down at the Marquette interchange for approximately three hours for the crash investigation.